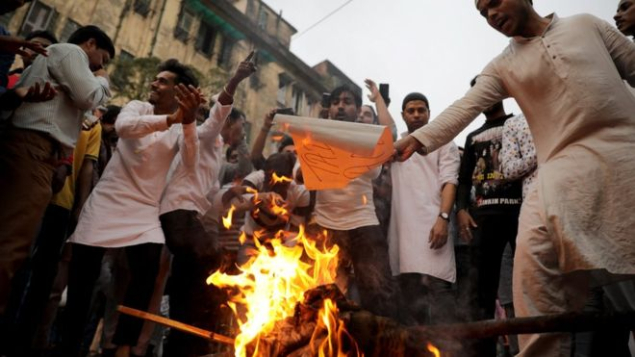 Protests in Kolkata against a controversial Indian citizenship law have continued into their second day.

The new law entitles non-Muslim migrants from three Muslim-majority countries to citizenship if they are facing religious persecution.

A curfew was also imposed in Guwahati, in the north-eastern state Assam, after two people died in clashes this week.

The curfew was lifted from 09:00 local time (03:30 GMT) until 16:00 on Saturday. Protest groups in Guwahati have said they plan to defy the curfew on Saturday evening.

The UK, US and Canada have issued travel warnings for people visiting India’s north-east, telling their citizens to “exercise caution” if travelling to the region. 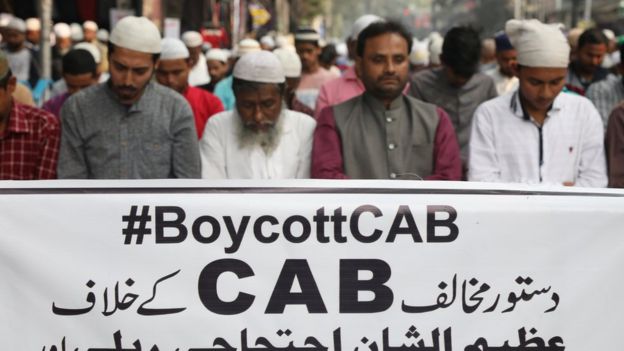 On Friday, Muslim demonstrators in Kolkata offered Friday prayers in front of their protest banner

Demonstrations have been breaking out across India. On Friday, hundreds of mostly student protesters clashed with riot police in New Delhi.

Officers used tear gas on the protesters and detained more than 40 students, the BBC’s Priyanka Dubey reports – adding that there was a palpable sense of anger on the streets of the capital.

Other, smaller rallies were also held in the southern states of Kerala and Karnataka.

Mamata Banerjee, West Bengal’s chief minister, opposes the law and has said she will not implement it. She has also called for more rallies to be held next week.

The chief ministers of Punjab, Kerala, Madhya Pradesh and Chhattisgarh have also said they will not implement the law.

What is the new law and why is it controversial?

The Citizenship Amendment Bill (CAB), which was approved this week, applies to non-Muslims from Pakistan, Afghanistan and Bangladesh, who have been persecuted for their faith.

As well as Hindus, this includes Christians, Buddhists, Sikhs, Jains and Parsis.

If people from these groups enter India illegally and can prove that they originate from one of the three eligible countries, they can become Indian citizens.

Muslim rights groups across the country and an opposition political party argue the bill is part of Prime Minister Narendra Modi’s “Hindutva”, or Hindu nationalism, and part of an agenda to marginalise Muslims.

Mr Modi denies this, saying that Muslims are not covered by the new law because they are not religious minorities, and therefore do not need India’s protection.

Critics argue that if the law were genuinely aimed at protecting minorities, it would include Muslim religious minorities who have faced persecution in their own countries – Ahmadis in Pakistan, for example.

They also say the bill violates secular principles enshrined in the constitution, which prohibits religious discrimination against all citizens. 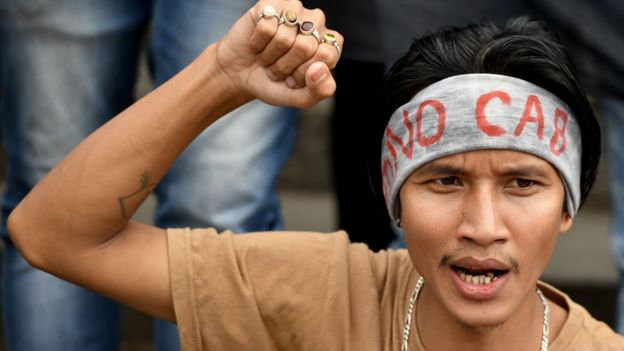 Protests have erupted across the country – including in Bangalore, where this demonstrator is pictured

There is also an anti-migrant element to some of the protests.

The BBC’s India correspondent, Soutik Biswas, says that the protests in Assam in particular have little to do with the law being seen as exclusionary or as a threat to secularism, and “more to do with indigenous fears about being demographically and culturally swamped by ‘outsiders'”.

Prime Minister Modi has sought to reassure people in Assam, telling them they have “nothing to worry” about.

“The central government and I are totally committed to constitutionally safeguard the political, linguistic, cultural and land rights of the Assamese people,” he tweeted on Thursday.

But it is unlikely residents would have been able to read the message, because internet and mobile services in the area were shut down.

Has the bill been legally challenged?

The Indian Union Muslim League, a political party, has petitioned the country’s top court to declare the bill illegal.

In their petition to the Supreme Court, the Indian Union Muslim League argued that the bill violated articles of equality, fundamental rights and the right to life.

More than 700 eminent Indian personalities, including jurists, lawyers, academics and actors, have signed a statement “categorically” condemning the bill.

Investigative journalist Rana Ayyub told the BBC that it was sending out the wrong message.

“Clearly you are catering to your Hindu base by telling them that this country is only for Hindus,” she said.

“The world’s biggest democracy had a big heart when it could accommodate people. Right now we are coming across to the world as petty vindictive civilisation. That’s not what India stood for.”

DISCLAIMER: The Views, Comments, Opinions, Contributions and Statements made by Readers and Contributors on this platform do not necessarily represent the views or policy of Multimedia Group Limited.
Tags:
Citizenship Amendment Bill
India
West Bengal