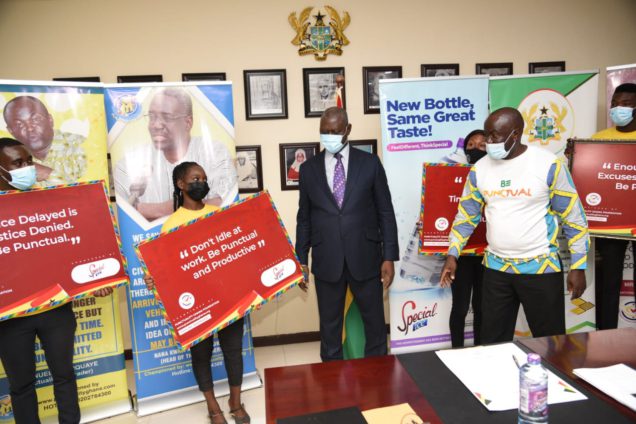 Chief Justice, Anin-Yeboah, has charged staff of the Judicial Service to respect time, as he launches the Punctuality Signages Court Branding Project.

The project, which is an initiative of the Punctuality Ghana Foundation, an NGO founded by crusader Emmanuel Amarquaye, is to inculcate the habit of respect for time among Judicial Service staff and the Ghanaian populace.

“As the saying goes, justice delayed is justice denied. The implication of this is that justice depends on our officers showing up at work early and getting their duties done with the necessary dispatch,” the Chief Justice said at the launch.

“I want to assure leaders and members of the Punctuality Ghana Foundation that we remain absolutely committed to the goals of this campaign on punctuality and productivity and that the Service retains a zero-tolerance approach to the lateness of any kind,” he warned.

The Chief Justice expressed concern that it has become typical for Ghanaians to arrive unfashionably late for social or professional events.

“There can be little argument about the punctuality deficit that we have in our country today…We are late for school, we are late for work, and we are late for our weddings. And as a joke, some of us would even be late to heaven,” he said as attendees to the event burst into laughter.

The CJ noted that millions of productive person-hours are lost every day in the public and private sectors due to the lack of respect for time.

This, he said, is hurting productivity.

“It is not uncommon for some to saunter into work several hours late, to meet people and work piled and in need of immediate attention,” he observed.

Lead Punctuality Crusader, Emmanuel Amarquaye told the gathering that the Public Service could not effectively complement the private sector to help accelerate the country’s development, without respect for time.

He called for investment in technology such as monitoring cameras in offices and electronic clocking in systems to address the poor work attitude and lack of respect for time.

He disclosed that the Punctuality Ghana Foundation will soon roll out projects to support the Public Service deal with non-punctuality and minimise poor work attitudes, including state-of-the-art attendance management and correspondence.