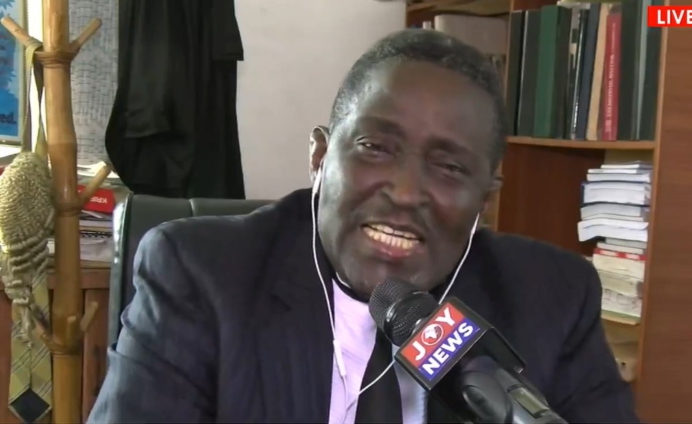 Lawyer for embattled Aisha Huang, Captain Nkrabea Effah Dartey has dismissed state prosecutors’ claim that Aisha Huang sneaked out of the country after her initial arrest.

The ‘galamsey’ queen appeared in court on Wednesday after being remanded into Police custody for two weeks when she was re-arrested last month.

Today, in court, state prosecutors while presenting their case said the first accused sneaked out of the country after her initial arrest and could not be prosecuted.

“The 1st accused again resumed the small scale mining activities without license and together with the 2nd, 3rd and 4th accused persons engaged in the purchase and sale of minerals in Accra without valid authority granted as required by the Minerals and Mining Act,” portions of the charge sheet read.

But Captain Nkrabea Effah Dartey who has been the lawyer for the first accused since she was first arrested in 2017 contested the prosecutors’ assertion.

In an interview with JoyNews on Wednesday, he noted that Aisha Huang did not flee the country.

“What happened was that I was defending Aisha Huang at High Court Criminal 1, then on the day that we were supposed to open our defense, the Attorney-General entered a nolle prosequi, which means do not prosecute, then the A-G took my client out of the court, the next thing I heard the next day was that my client has been flown out of Ghana back to China or wherever.

“Today we are being told in the court that she sneaked out of Ghana which is false, a blatant untruth, an inaccurate statement which was made to the court, very sad,” he said.

Prior to today’s court proceedings which unravelled fresh information about the exit of Aisha Huang, Information Minister, Kojo Oppong Nkrumah had told JoyNews on Tuesday that the ‘galamsey’ queen was repatriated.

He stressed that a repatriation order or note was issued to this effect.

According to Mr. Nkurmah, the ‘galamsey’ queen was put on a flight and she exited the Ghanaian jurisdiction.

The Ofoase-Ayirebi MP made these comments while clarifying President Akufo-Addo’s comment about his uncertainty regarding how ‘galamsey’ kingpin exited the country in 2018.

The President in an interview on a Ho-based radio station on Monday, as part of his tour of the Volta Region, said “I’m not still sure whether she was in fact deported. Or whether she fled the country the first time and has now come back. There still seems to be some uncertainty about it.

President Akufo-Addo has since been severely criticised for his comment which has been described, among others, as a “mockery” of the security architecture.

Meanwhile, Aisha Huang was on Wednesday remanded into police custody for the next two weeks as the Accra Circuit Court turned down her request for bail.

Her lawyer, however, disagreed with the court for refusing her bail request.

“If you grant bail today, it will mean the judiciary of Ghana is applying the laws. Don’t look at them as Chinese. If you refuse to grant them bail, they will say the A-G’s advice has been taken,” Mr. Dartey pleaded.

DISCLAIMER: The Views, Comments, Opinions, Contributions and Statements made by Readers and Contributors on this platform do not necessarily represent the views or policy of Multimedia Group Limited.
Tags:
Aisha Huang
Nkrabeah Effah Dartey