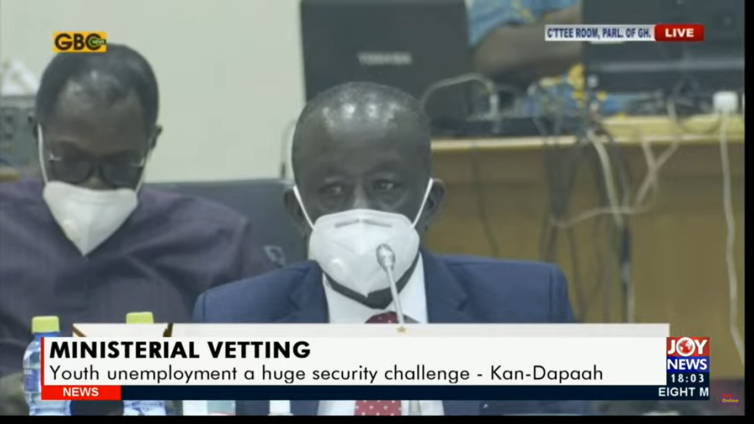 The Minister-designate for National Security, Albert Kan Dapaah has highlighted the need for close collaboration among security and intelligence agencies within the West African sub-region to fighting terrorism and transnational crime.

In that regard, he said, President Akufo-Addo in his first term, brought together heads of security and intelligence agencies from Ghana, Burkina Faso, Cote d’Ivoire, Togo and Benin to Accra, christened the “Accra Initiative” to strategise ways to work together to combat terrorism in the subregion.

The measure follows similar collaboration of security agencies in countries within the Sahel and Lake Chad regions.

Mr Kan-Dapaah made this known during his vetting by the Parliament’s Appointments Committee on Wednesday.

The Minister-designate noted that the collaboration of the security and intelligence agencies of the six West African countries had enabled them to undertake joint security operations and share intelligence information.

“Fighting against terrorism requires more money and resources because terrorism has become very real in recent times and so the countries in the subregion need to work closely to prevent potential attacks,” Mr Kan-Dapaah emphasised.

He further stated that more resources and personnel were needed to scale up protection of the nation against any possible external attacks.

Mr Kan-Dapaah underscored the need to leverage on available technology in detecting and halting terrorist activities from occurring in the sub-region.

Giving the role he played over the past four years as the Minister of National Security, Mr Kan-Dapaah said he was able to lobby Cabinet to devote quite a substantial amount of resources to the Ministry, which enabled it to keep a step ahead of criminal elements in the country.

“I must say that over the past four years, I have been able to convince Cabinet to devote a substantial amount to the security and intelligence agencies to do that job,” he added.

The Minister-designate noted that terrorism was not as dangerous in the past as it is today.

“We need the resources and men to keep these terrorists away,” he stressed.

The over four-hour drilling allowed the Minister-designate to respond to questions on threats of illegal mining, deployment of soldiers at the country’s borders, military invasion of Parliament, recommendations of Emile Short Commission of Inquiry that investigated the Ayawaso West Wougon by-election violence, 2020 Election infractions and other pressing national security issues.

DISCLAIMER: The Views, Comments, Opinions, Contributions and Statements made by Readers and Contributors on this platform do not necessarily represent the views or policy of Multimedia Group Limited.
Tags:
Appointments Committee
Kan-Dapaah
Ministerial Vetting
National Security