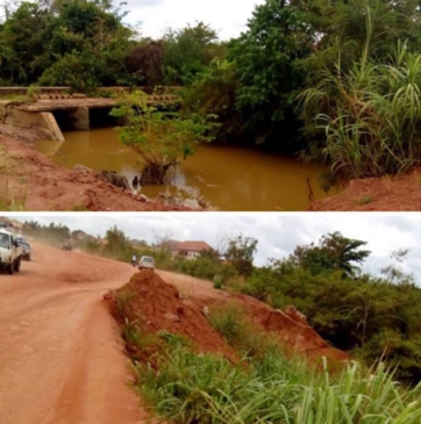 Residents of Esereso in the Bosomtwe District have expressed worry over the collapse of the bridge linking the town and other communities in the area which is affecting the socio-economic activities of the people.

The Bridge, which connects Atonsu, Esereso, Aputuogya, Kuntanase through to Lake Bosomtwe, has been in a deplorable state since 2016 and has now become a death trap.

According to the residents, the deplorable nature of the bridge was affecting trading, healthcare delivery, education as well as farming activities in the area since most drivers were unwilling to ply the road.

The few who tried to use the road are also charging exorbitant transport fares, Ofori Amanfo, a farmer, told the Ghana News Agency during a visit to the community that the road became inaccessible any time it rained.

According to him, though there was on-going construction work on the main Kumasi to Kuntanase road, there was an urgent need to repair the collapsed bridge to ease the sufferings of the people in the area.

Mr Amanfo appealed to the Bosomtwe District Assembly to hear the cries of the people in the area and take immediate steps to reconstruct the bridge to bring relief to the people.

Ama Osaah, a trader also appealed to the government and stakeholders to help fix the bridge to prevent the area from being cut off from other communities in the district.

She disclosed that more than four vehicles had fallen into the bridge yet, it seemed nobody was interested in ensuring that it was fixed to save lives.