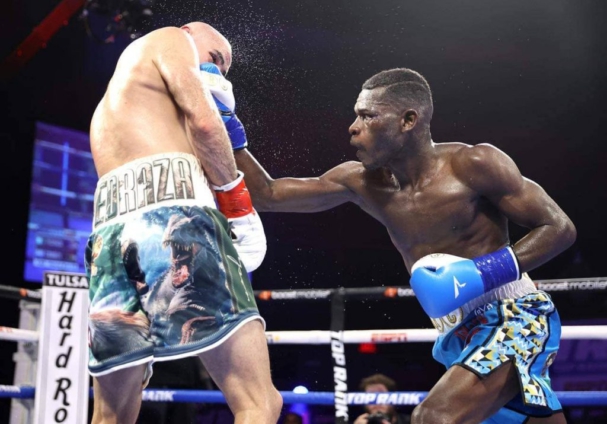 The recent draw recorded by Ghana’s Richard Commey against former two-time world champion Jose Pedraza has opened up quite a number of options for him in the light welterweight division.

Commey (30-4-1, 27 kos) following his loss to Ukraine’s Vasily Lomachenko is on a mission to pick up the pieces to reclaim world title glory. As usual, the path towards the eventual aim looks a tough one. But the Ghanaian doesn’t seem perturbed by the beckoning sacrifice. On several occasions, he has talked about being a warrior who fears no stiff battle.

Jose Pedraza in a post-fight interview stated clearly that he’d be glad to offer Commey a rematch. “If they demand a rematch, I’m ready to give Richard Commey a rematch because he deserves it and I have the utmost respect for him. Ultimately, my goal is to win a world title once again. Whatever I have to do, that’s what I’m willing to do,” Pedraza said. Commey is yet to make any comments regarding his next move. In the instance where he accepts it, the bout will provide a further push for rankings visibility.

Before this bout, Pedraza’s camp were seriously fancying a clash with former champion, Teofimo Lopez who is currently fifth at number one contender on the WBO table, WBC, eighth at WBA and 10th on the IBF log. The latter is said to be looking in another direction for his December 10 bout at the Madison Square Garden.

The most recent updated rankings of all the major world sanctioning bodies Commey is best ranked at the WBC were occupied the 13th position. They include Jose Pedraza who is one place above him in 12th. It also has Teofimo Lopez (17-1, 13kos) whom he lost his IBF title to in fifth place. Ryan Garcia (29-0, 19 kos) defeated Commey’s compatriot Emmanuel Tagoe in April, in sixth.

The number one contender Jose Zepeda (35-2, 27 kos) who holds the WBC silver title and the number two Regis Prograis (27-1, 23 kos) could both be given the opportunity for a shot at the main title. So third-placed KO specialist Gary Antuanne Russell, who is undefeated in 16 bouts, Jose Carlos Ramirez (27-1, 17 kos) who is fourth and Catalonian-born Sandor Martin (40-2, 13 kos) who is seventh.

Between Martin and Commey, there is also the likes of Subriel Matias (18-1, 18 kos) of Puerto Rico, American Arnold Barboza who is undefeated in 27 bouts with 10 coming via knockouts and Omar Alejandro Aguilar (24-1, 23 kos) and undefeated Argentine Jeremias Ponce (30-0, 20 kos).

Out of the 10 world champions in Ghana’s boxing history at least two champions within the welterweight space. Joshua Clottey after his famous defeat of Zab Judah in 2008 annexed the IBF welterweight title and had to vacate it when he had to choose between defending to South African Isaac Hlatwswayo and a good payday against Miguel Cotto at the Madison Square Garden. He eventually lost via a split decision.

Before Clottey’s exploits, Ike Bazooka Quartey had held the fort in the division, winning the WBA welterweight title at the expense of the then champion, Crisanto Espana in France in 1994. Quartey successfully defended the title seven times before his eventual loss to Oscar de La Hoya.

For now, Commey is expected to take a brief holiday in Ghana while his team at Streetwise Management work on his next fight which will come off before the end of the year.