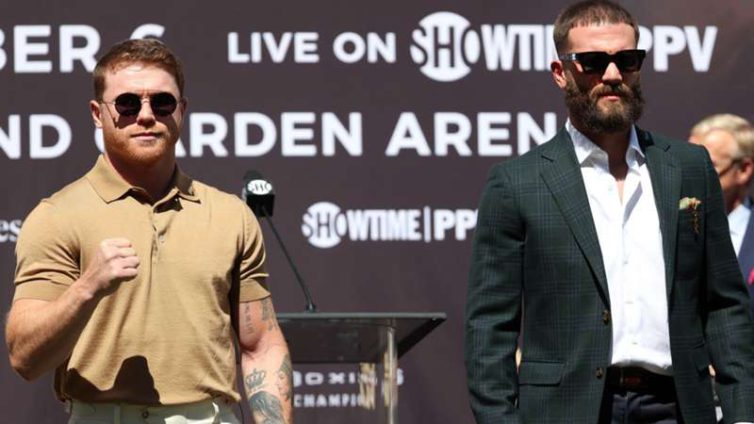 Saul Canelo Alvarez and Caleb Plant will kick start a long list of top boxing events by Bob Arum’s Top Rank between now and December, a period which will also see two Ghanaian boxers in action.

Canelo’s WBA, WBC and WBO titles and Plant’s IBF belt are at stake on Saturday night to decide who sits atop the super-middleweight division.  There’s animosity at the heart of their fight after the pair traded punches at their first press conference face-off with Plant sustaining a cut beneath his eye.

Caleb Plant is undefeated in 17 fights while Canelo is aiming to clean out the division after recent victories against British pair Callum Smith and Billy Joe Saunders.

The Crawford vs Porter event also features Isaac Royal Storm Dogboe who takes on Christopher Diaz as he continues his journey towards becoming two time champion. Back to back defeats against Emmanuel Navarrete seem a distant memory after staging a successful return against Chris Avalos and Adam Lopez in the last two years.

You might want to mark December 11 on your calendar because another Ghanaian mounts the ring in the hopes of inching closer to another world title shot. Vasyl Lomachenko and Richard Commey have a common denominator-both men lost their title(s) to Teofimo Lopez.

The Ghanaian and Ukrainian will be locked in a war with potentially damaging ramifications for the man that comes up short. Richard Commey vs Vasyl Lomachenko is arguably boxing’s most exciting non-title match up with the makings of fight of the year contender.

Artur Beterbiev and Marcus Browne will go at each other for the IBF and WBC light-heavyweight titles on the line on December 17 to complete 60 days of world class boxing.