Coronavirus: How Chinese rivals are trying to take Zoom’s crown 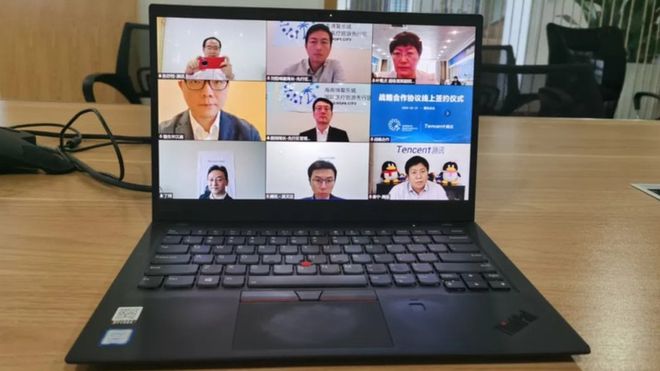 Video meetings have become hugely important as the world adapts to the “new normal” of the pandemic.

Even as lockdown rules ease, they’re a safe, convenient and free way to stay in touch for business and socialising.

Zoom has become the app of choice for millions, overshadowing rival products from much larger companies such as Microsoft and Google.

But the firm is now facing major challenges from some of China’s biggest technology companies.

Since then two big Chinese video conferencing apps have significantly increased the size and reach of their services.

Alibaba’s DingTalk says it is used by more than 10 million businesses and organisations and in excess of 120 million students across China.

As more people have been forced to work from home DingTalk has tripled the number of participants that can join a meeting to just over 300.

In April, Alibaba launched the global version of the app, DingTalk Lite, across key Asian markets, including Japan, Singapore and Hong Kong. It is now available in Japanese, English, and Traditional Chinese.

VooV is the international version of Tencent Meeting, which was launched in December last year, and is currently available in several countries including India, Japan and Singapore. It can also host 300-strong meetings.

“With the mounting number of new Covid-19 cases outside of China, we look forward to providing our users in other countries and regions with the capabilities to work remotely. As we move forward, we plan to roll out the service across the world, in compliance with local regulations,” Lori Wu, vice-president of Tencent Cloud said as VooV was launched.

Zoom came under further restrictions in China from the start of this month.

“In mainland China, new user registration is currently limited to enterprise customers who sign up through authorised sales representatives. Free users in mainland China may continue to join meetings hosted by registered customers,” a company spokesperson told the BBC.

According to Zoom’s own numbers it now has 300 million daily active meeting participants, although it does not publish figures on daily users or registered users.

There are huge amounts of money at stake, with the global market for teleconferencing technology predicted to reach $16bn (£9.2bn) by 2030, up from $6bn last year, according to business forecasting and analysis company Transparency Market Research.

Software analyst Rishi Jaluria from DA Davidson highlighted how he sees different apps trying to get a slice of this market.

“Zoom is primarily an application for businesses, not consumers. The Covid-19 pandemic and the subsequent lockdowns have led to rapid consumer adoption of Zoom, but remember, Zoom isn’t trying to monetise those consumers through advertising or data.”

“On the other hand, the owners of DingTalk and VooV, Alibaba and Tencent, respectively, have multiple businesses that rely on advertising and user data,” he added.

DISCLAIMER: The Views, Comments, Opinions, Contributions and Statements made by Readers and Contributors on this platform do not necessarily represent the views or policy of Multimedia Group Limited.
Tags:
Aibaba DingTalk
Video call
Zoom