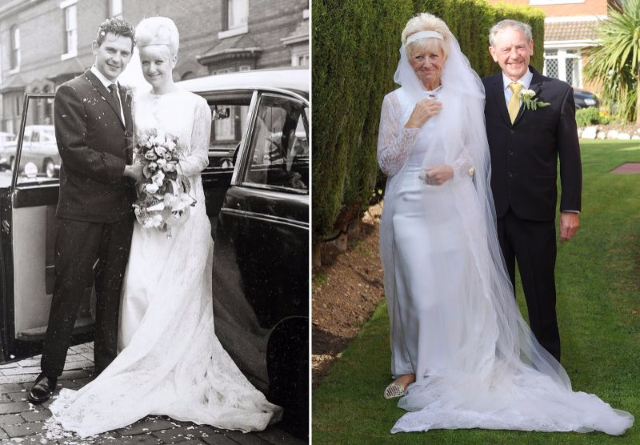 Wedding clothes are a strange thing when you think about it – one of the biggest outfits of your life is worn for a day, then put at the back of the cupboard and never put on again.

Not for Carole-Ann and Jim Stanfield, who decided to wear their original wedding clothes to celebrate their 50th wedding anniversary.

The couple were surprised to find that their outfits still fitted 50 years on, after discovering them covered in dust in their loft.

Their granddaughter Hayley had visited and wanted to look at some old family photo albums, and Jim stumbled across Carole-Ann’s wedding dress.

Having last worn them in 1966, the outfits still – incredibly – fit after all those years.

“When Hayley discovered we still had our wedding outfits, she said we should try them on to see if they still fit,” Carole-Ann told Metro.

“Jim went up and dug them out. Hayley insisted we put them on but I said no, they’d been in the loft and they were dusty and smelly.

“But she begged and pleaded so we did it for her – we were gobsmacked when we discovered they still fitted perfectly.”

And so, Hayley thought it’d be a great idea to throw a party at which Carole-Ann and Jim could wear their original outfits.

“A lot of people knew we were going to wear them, but they were still stunned to see us in them.”

The pair originally met at the men’s club where Jim worked in 1962, and the rest is history.

While they originally honeymooned in Malta back in 1966, they’ll be jetting off to Turkey this time.