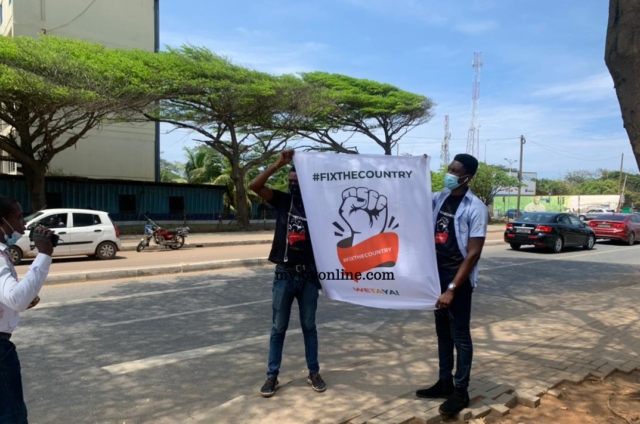 An Accra High Court has dismissed an injunction application by the Ghana Police Service seeking to restrain a street protest by #FixTheCountry campaigners.

In the last few months, the #FixTheCountry campaigners have agitated on social media demanding that government addresses challenges that, have for years, bedevilled the nation.

A plan to hit the streets to protest in this regard has, however, been met with stiff resistance from the Police Service.

On Friday, Attorney General Godfred Yeboah Dame urged the court to place an injunction on the group in order to prevent them from protesting till Covid-19 restrictions are lifted.

He insisted there is currently in force an Executive Instrument barring large political gatherings.

Mr Dame insists the protest is a political gathering because it is demanding fulfilment of reneged government pledges.

The Protestors however disagree. Their lawyers told the court that political gatherings are already taking place.

They also insisted the Ghana Health Service is on record to have indicated that outdoor gatherings cannot be said to contribute to the spread of Covid-19.

Justice Aryeetey, in dismissing the application, stated that the protestors should comply with the necessary laws for any future intended demonstration.

DISCLAIMER: The Views, Comments, Opinions, Contributions and Statements made by Readers and Contributors on this platform do not necessarily represent the views or policy of Multimedia Group Limited.
Tags:
Demostration
FixTheCountry Campaign
Godfred Yeboah Dame
Street protest