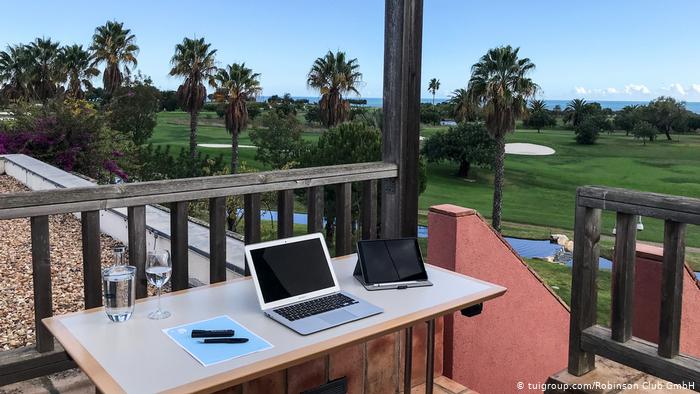 Hard-hit by the Covid-19 pandemic, some travel industry operators are offering “workations” for people with cabin fever from working at home. How many people will be tempted to add sun and sand to their Zoom meetings?

Some travel operators have begun offering “workations” for people sick of turning their homes into their office. Even before the pandemic, so-called digital nomads combined work and travel. There are now millions of workers who theoretically could do the same.

And as winter approaches in the Northern Hemisphere, one of the major travel companies has seen its chance: Robinson, a subsidiary of the UK-German operator TUI Group, is offering customers workspaces in holiday clubs.

The South of Portugal is currently one of the last holiday destinations in Europe that is not classed as a high-risk area by Germany. In one of its advertisements, Robinson is now proclaiming “a new work philosophy” that can be pursued in a vacation resort in the Algarve: Guests can concentrate completely on their jobs and, when finished with their tasks, improve their work-life balance — all with a comprehensive hygiene plan in place.

According to Robinson, there are quiet rooms equipped with ergonomic desk chairs and conference rooms, and IT support can be booked if needed.

In the first nine months of 2020, TUI had losses of €2.3 billion ($2.7 billion) and borrowed almost €3 billion from the German government, which it has to pay back over the coming years. But the current promotion is off to a good start, a press spokeswoman said over the phone, though she wasn’t ready to say what “more than a handful of reservations” meant in real numbers.

A second vacation resort, on the Canary Island of Fuerteventura, is now ready as a place of work, and more are expected.

Whether people will be able to be productive at a holiday resort depends very much on their degree of self-discipline, said Florian Kunze, an economist from the University of Konstanz.

“If I am someone who puts things off and lacks structure, it will be harder for me to work in this setting,” he said. Whether working at home or in a holiday setting, he added, it remained important to successfully manage the change from the work sphere to the private sphere.

In the spring, when many people had been working from home for just a few weeks, Kunze was involved in a study on the topic. It showed that 77% of respondents felt there was an improvement in their work-life balance when they worked from home.

But 36% were also of the opinion that they felt lonelier working from home than in their normal places of work. And this aspect is not likely to improve much if someone is sitting alone at the computer in a hotel room with a view of the sea.

Kunze said the workation concept raised another question. “In some companies, there is a debate about fairness with regard to who is allowed to work at home. After all, not everyone can,” he told DW. “And in big companies, it will be hard to justify it if those who are allowed to work from home are also able to work in holiday regions.”

This debate is also taking place within German society in general — particularly after Labor Minister Hubertus Heil proposed giving all employees the right to work from home, if possible. Kunze said about 40% of jobs could be done from home; a study by the Munich-based think tank ifo Institute put that figure at between 17 and 42%.

This means that workation offers are practicable only for a limited number of people — and only a small proportion of these will be able to escape the pandemic winter. In view of this, Kunze has advised people working at home to be flexible with their time.

“You can structure your working day so that you make use of the daylight by doing sport in the morning and working more in the darker hours, for example. Then you can organize remote working in a way that benefits your personal well-being,” he said.