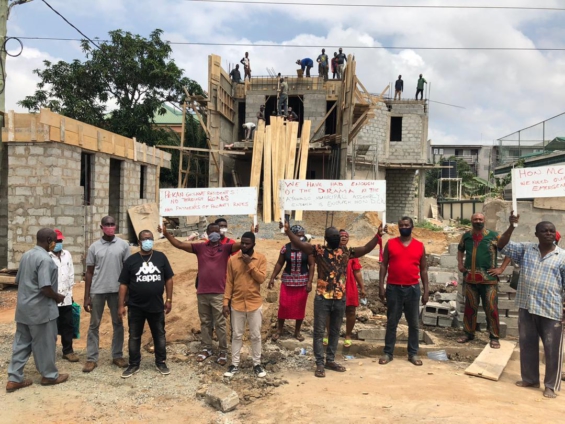 Penka Enclave East Legon Residents Association on Monday called on city authorities to demolish a building being constructed on an access road in the area to safeguard the community.

The Association said it had petitioned the Office of the Vice President and the Chief of Staff on the issue with the relevant pictures attached after all steps to stop the construction had failed.

Enoch Gyasi Nkansah, a member of the Association, told the media in Accra that the construction was being done on the only access road to the community, which had served the people for 30 years, especially during emergencies.

Giving a background to the actions taken by the Association, he said on June 9 it petitioned the Attorney General to go to their aid and the matter was referred to the Local Government Ministry.

Mr Nkansah said the Minister tasked the Ministry’s Engineer to inspect the site, after which it was established that the site was actually a road on the Master Plan.

He said the Association made follow-ups to the Ministry and several meetings with the Engineer and the Ayawaso West Municipal Chief Executive to discuss the progress of the matter.

“The Association was told that the case was in court and the building was going to be pulled down. But after a few months we saw construction works on the building was being continued,” he said.

He said the Association went back to notify the Assembly about the development and that later when workers came to the site to work, he personally called the Assembly’s lawyer who asked him to take pictures and videos.

The group later presented the pictures and a petition to the Ayawaso West Municipal Assembly.