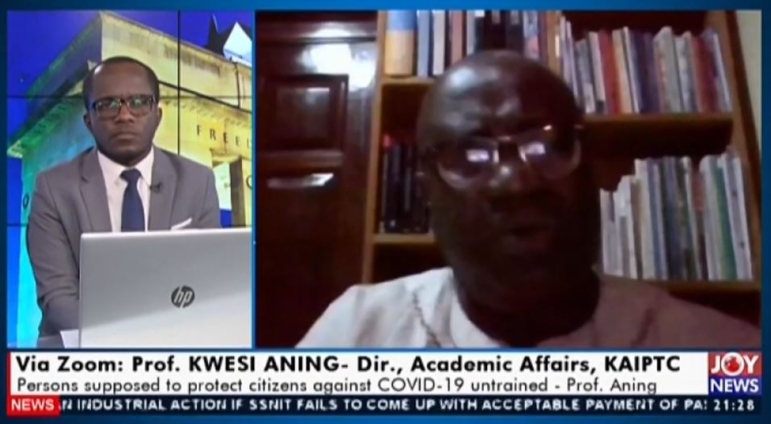 Director at the Faculty of Academic Affairs and Research for the Kofi Annan International Peacekeeping Training Centre, has said the concept of vigilantism in Ghana is beginning to transform into services open to the highest bidder as the December polls draw near.

According to Dr Kwesi Aning, the development must be critically assessed by the security agencies to ensure these activities do not escalate to mar the upcoming general elections.

Some Ghanaians last year expressed concern about a government white paper issued on the back of the Emile Short report after the Ayawaso West Wuogon Commission of Inquiry which many said leaves much to be desired as it dismissed some critical findings made.

Dr Aning was not taken aback by this situation, he told JoyNews June 11, 2020.

“Commissions of Inquiry historically in Ghana have been used as a funnel to release pressure tensions in society whenever there has been a crisis of some sort. No post-independence government has had any interest in bringing out a White Paper whose recommendations it continues to recommend.”

Subsequent interventions by institutions such as the National Peace Council and meetings by political parties to disband the vigilantism menace groups have not resulted in much.

The main opposition National Democratic Congress (NDC) also refused to sign the Peace council’s document saying it will be premature since most of the agencies assigned greater responsibilities have not been made to sign.

The security analyst believes the passage of the Vigilantism and Related Offences Act in 2019 was also ‘dead on arrival’ because it failed to address the dynamics of the groups within its remit.

“From foot-soldiers to militias [the vigilantism law] does not seem to recognise the transformation and the franchising that is taking place,” he said.

Dr Aning fears these development seem to have rather cause the movement to metamorphose into different forms causing perpetrators to put their services on sale to stay afloat as against the party lines as initially known for.

“What we are going to see between now and December is a different type of politically-related violence of a way in which violence becomes a currency, franchised and sold to the highest bidder,” he said.

He believes their dynamics have also silently increased from the entrenched party affiliations into the potential to even harm their own leaders as “those who established the vigilantes themselves are now beginning to become victims.”

This coupled with the “gradual lack of control over these armed groups” as Dr Aning, describes, has brought the country to this point, he said on PM Express.

He added that: “were we to scatch the surface, we will see networks crossing the boundaries and sharing information with even more dangerous groups that the vigilantes themselves.”

Wednesday’s edition of the show was geared towards assessing Ghana’s strengths, gaps and vulnerabilities in public safety and security ahead of the December elections.