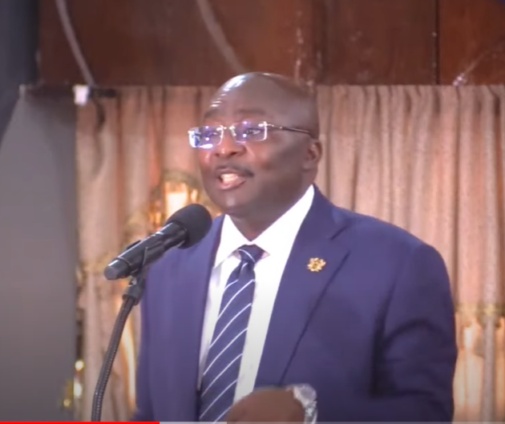 Vice President Dr Bawumia, addressing a gathering at the University of Ghana Business School (UGBS), at the launch of the School's 60th Anniversary

Mrs. Addah said there must be swift action taken and not just referral to the Special Prosecutor to handle such issues.

According to her, there should be a thorough investigation at the Presidency to ascertain if the interest to fight corruption still exists.

This, she explained is because most presidential staffers have been cited in documentaries engaging in corrupt practices.

“If you would recollect, sometime back, Anas’ number 12 cited people in the Jubilee House for being complicit where he mentioned that the President is in his pocket, if I remember correctly and then there were also allegations some Deputy Chief of Staff who is now Minister,” she said.

The anti-corruption campaigner said this in an interview on JoyNews’ News File on Saturday.

Her comments are in relation to the revelation by the dismissed Minister of State, Adu Boahen that Vice President Bawumia needed $200,000 as an appearance fee to meet prospective investors in an under-cover expose by ace investigative journalist, Anas Aremeyaw Anas.

In the documentary, Mr. Adu Boahen is said to have told the undercover investigators who posed as investors that Dr. Bawumia would also require some positions from the investor for his siblings to get his backing and influence in establishing a business in Ghana.

But Dr. Bawumia took to his Facebook page to deny the accusations and called for the Minister to be sacked and investigated by the Special Prosecutor.

President Akufo-Addo subsequently sacked the former Minister of State at the Finance Ministry and directed the Office of the Special Prosecutor (OSP) to investigate him.

Mrs. Addah opined that if an immediate and thorough investigation into the activities of presidency is conducted, the chances of recurrence will be reduced.

In a related development, the Programmes Manager at the Ghana Integrity Initiative (GII), in an interview on JoyNews’ The Pulse called for investigations into the allegations levelled against Vice President, Dr. Mahamudu Bawumia.

“We should have an investigation which centres particularly on this allegation that if you have (USD) 200,000 you should be able to secure a meeting with the Vice-President and I know the state institutions that have the mandate to investigate will do so and do a good job at that,” she said.

DISCLAIMER: The Views, Comments, Opinions, Contributions and Statements made by Readers and Contributors on this platform do not necessarily represent the views or policy of Multimedia Group Limited.
Tags:
Corruption
Dr Bawumia
Mary Addah