Dr Gyan at 50: A crowning glory to a career still in motion - MyJoyOnline.com

Dr Gyan at 50: A crowning glory to a career still in motion 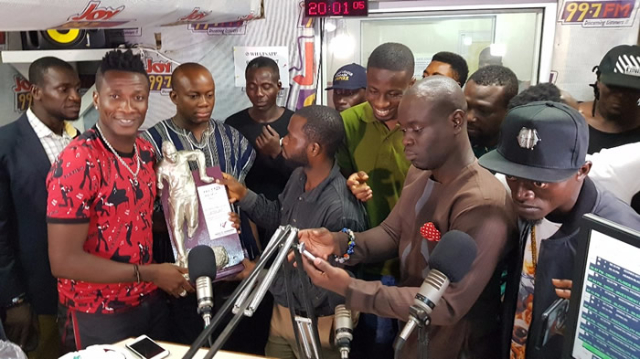 In a week when he underlined his goal scoring credential with a tipping header from an immaculate cross in a Nations Cup qualifier, Ghana’s Asamoah Gyan could not have asked for a better recognition than the one exhibited by Joy Sports and the Multimedia Group when he appeared on Lexis Bill’s Personality Profile on the Drive Time programme on Joy.

He was mobbed, sang to, in a blend of voices by a Joy Sports team who must remain in Sports presentation and not venture into singing; he was presented with a surprise 50-goal cake and a sculpture molded in the frame of the deadly jet in a goal scoring action. Those well thought-out surprise package left the Baby Jet humbled, almost in tears, muffling how his sweat and unflinching commitment to die for Ghana has been rewarded in a special way.

He came to the Joy studio with a band of national supporters, singing and chanting, an appearance not too surprising from a man, a player gifted with many talents- singing, dancing only to mention but a few.

He expected a hearty conversation with a few unsettling questions about his perceived rivalry with Dede Ayew; about the recent customized captain’s armband; about the Black Stars trophy drought; he expected the all inquisitive host, Lexis Bill to pry at least a little into his private life, his business and everything Baby Jet, as he is affectionately called.

Lexis did not disappoint. His questions were quite predictable and Gyan, singing the chorus of being “real” answered them with the candor he could muster.

He wanted journalists to stop fueling a non-existent rivalry between himself and Dede and also gave, at least, a hint about how he got his wife in 2003 at the Wangara Hotel.

For a man who fell in and out with the difficult-to-please-football-fans, Gyan said his penalty miss at the crucial final minute of the 2010 World Cup quarter final match was just enough to break the career of many.  But to bounce back within minutes of that torture and take another penalty is a testimony of a man made of sterner stuff, a player with a mental toughness only few can boast of.

“Steve Bruce, the manager of Sunderland called me and told me that he signed me because of my mental toughness,” Gyan said.

Gyan who exudes the tricky, skillful feet of Abedi Pele and the stupendous headers of Tony Yeboah, two of Ghana’s prolific players of the late 90s, has racked up as many as 50 goals with his feet, head; 42 of those goals were outside Ghana. Only eight were in Ghana; four in Accra and four in Kumasi.

With a startling influence on the team, Gyan dreads leaving the Black Stars team without a trophy but says he will fight for that trophy that has eluded Ghana.

“When the time comes for us to win, we will win,” he said with a tinge of lust, after a trophy which no Ghanaian footballer has won in the last 34 years.

“In his lust came the surprise. “Happy 50 to you; Happy 50 to you” they sang in awkward voices. Nathaniel Attoh, Gary Al-Smith, Baaba Tandoh and Benedict Owusu all of the Joy Sports team burst into the studio bearing a cake to the Baby Jet. Their voices mattered little. The symbolic gesture mattered more.

“We want to celebrate you whilst you are alive,” they said. Gyan was stunned! In his speechlessness came the Kumawood finest. Lil Wayne with his rib cracking performance, eulogized the man who plays with an alluring capacity, sometimes toying with the best of defenders.

Gyan managed a smile; for who wouldn’t when Lil Wayne is around? No sooner came another surprise.

The Addogod Foundation skilled in the art, presented to Gyan a “Legend Award 2017”, a monument framed in the form of Gyan in a deadly attack at an opponent’s goal.

Then to top it all came the announcement! If Barima Zoom Zoom Nelson is the only professor in boxing, Gyan will soon, and for a while be the only doctor in Ghana’s football.

The Alfred Noble University in Ukraine, which is affiliated to the Kwame Nkrumah University of Science and Technology, will soon bestow on the Black Stars captain an honorary doctorate.

Gyan was filled with emotions, picked his words carefully and very few came.

“I was playing for God and country,” he suggested but didn’t know I will be honoured this way.