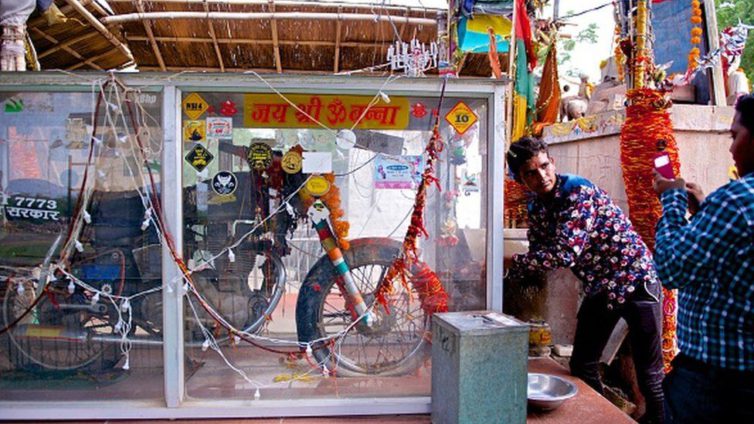 The film is inspired by a roadside temple in Jodhpur, were the deity is an old Royal Enfield Bullet motorcycle

A new film, which is based on a bizarre story of a temple dedicated to a motorcycle deity, is creating a buzz in the international festival circuit, writes Faizal Khan.

Modestly titled, Dug Dug, echoing the thumping sound of a Royal Enfield motorcycle first made in the English town of Redditch, Worcestershire, more than a century ago, the film has a fairy tale plot.

An inebriated man driving a motorcycle on a highway is run over by a truck. Next morning, his vehicle disappears from police custody and mysteriously surfaces on the same spot where he had died. Hauled back to the police station, the motorcycle keeps returning to the roadside scene of the accident. A combination of village intrigue and superstition soon lifts the dead man into a saint and his motorcycle a deity in the desert state of Rajasthan.

The Hindi language film is a scorching satire on the quirky rituals and commercialisation of religion. Narrated with simplicity, the film explores the drama and mystique that makes droves of unsuspecting people want to cling to their bizarre beliefs.

“If you believe in something wholeheartedly, it works for you,” said Ritwik Pareek, the director of Dug Dug, who was born in Jaipur, Rajasthan’s capital.

The 107-minute feature film, which had its premiere at the 46th Toronto International Film Festival last month, is inspired by a temple in Pali, about 75km (46 miles) from Jodhpur, a favourite destination with foreign tourists in the state.

The deity of the roadside temple is an old Royal Enfield Bullet motorcycle kept on a pedestal. The motorcycle belonged to local resident Om Singh Rathore who died in an accident on the highway connecting Jodhpur to Jaipur city more than three decades ago.

The temple, popularly known as the “Bullet Baba” (Baba in Hindi means saint) temple, is a favourite spot for truck drivers on long hauls who stop at Pali to offer prayers to keep them safe on the country’s tricky highways.

India tops the number of road-accident deaths in the world accounting for 11% of all such fatalities around the world, according to the Ministry of Road Transport and Highways that recorded 151,113 accident deaths in 2019 for which the latest data is available.

“In India we have so many temples, one is more bizarre than the other,” said Pareek, who quit his job as an art director in advertising in Mumbai six years ago to become a full-time filmmaker. And instead of staying in Mumbai, the seat of Bollywood, he returned home to Jaipur.

One day he was reading The God Delusion, a 2006 book by British evolutionary biologist Richard Dawkins questioning personal beliefs, when Pareek remembered the motorcycle deity in Jodhpur.

“The idea for Dug Dug was born there,” he said. Pareek soon headed for the “Bullet Baba’ temple and several more across Rajasthan in the next five months for research.

“I visited the temple in Pali as a kid. My family is very religious and my grandmother used to take me with her whenever she visited temples. She was very strict about rituals,” said the filmmaker, who deputed his father to Jodhpur to talk to Rathore’s family about making a movie. The family had two conditions – don’t use Rathore’s real name and no mention of his caste.

After he finished writing the script, Pareek auditioned over a hundred people, most of them non-professional actors from villages around Ramgarh, about 40km from Jaipur where the film is shot.

A local man selected for playing Thakur Lal, the film’s character based on Rathore, left the set saying he revered Rathore too much to play him. An old Luna, an Indian moped modelled on the Italian Piaggio vélo bike, replaced Rathore’s Bullet motorcycle in the film.

“This is our version of the Jodhpur temple story,” said Prerna Ritwik, the director’s sister and the film’s producer about their first feature film. “In India, almost everyone has a story from their childhood that involves a miracle,” she added.

“It never pokes fun at anyone, instead shows you the power of belief,” said Rohan Rajadhyaksha, a member of the Indian musical group Salvage Audio Collective, which composed the music for the film.

The film and its makers are now waiting for another run on the international festival circuit.

“Every culture has aspects that may seem eccentric to another,” said Peter Kuplowsky, the Toronto festival programmer who selected Dug Dug for its Discovery section that presents compelling and diverse stories from around the world every year.