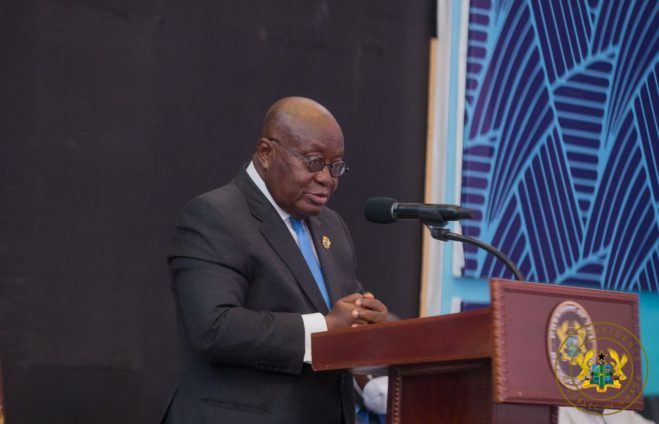 President Akufo-Addo has reiterated the need for Ghanaians to rally behind government’s decision to implement a 1.75% levy on all electronic transactions.

In a tweet on Thursday, he said through the levy, government will be able to mobilise revenue to improve the country’s road infrastructure while providing job opportunities for the teeming number of unemployed youth in the country.

Akufo-Addo also added that the levy will help in reducing the country’s reliance on debt.

“The E-levy will provide government with revenue to build more roads, provide more jobs and opportunities for the youth and reduce our dependence on debt”, the tweet read.

The President’s tweet was also accompanied by a video explaining the need for the levy.

The e-levy will provide Government with revenue to build more roads, provide more jobs and opportunities for the youth and reduce our dependence on debt. #GhanaNeedsTheELevy #ElevyForDevelopment pic.twitter.com/c2ecGOa412

The President’s tweet adds to efforts by government to sensitise Ghanaians on the relevance of the levy and why it must be passed. In this regard, government is also holding a town hall meeting to engage citizens on the E-levy Bill and solicit the citizenry’s support.

However, the Minority in Parliament have affirmed their readiness to kick against the Bill, despite the arguments from government.

According to the Minority, government has failed to manage the revenue accrued from previous taxes, and thus the e-levy will not address the country’s revenue challenges.

The Minority have also argued that if passed, the Bill will make life difficult for many more Ghanaians and collapse small scale businesses.

Meanwhile, a group, calling itself “Justice 4 Ghana’, is picketing at Parliament to pressure members to reject the Bill.

The group leader, Bernard Monarh, told JoyNews that they will stay at post until the ‘obnoxious’ Bill is finally rejected.