Ebo Whyte's 'I Slept With Your Wife' comes off this weekend - MyJoyOnline.com 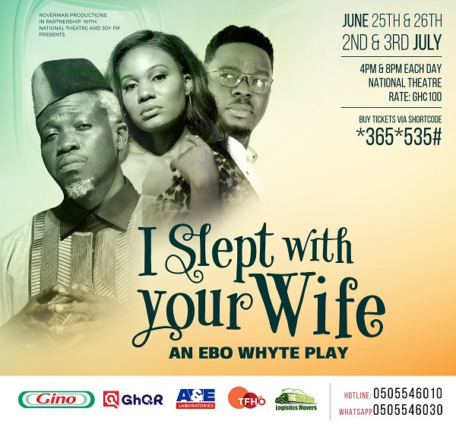 Celebrated playwright, Ebo Whyte is out with another entertaining play for theatre lovers.

The play ‘I Slept With Your Wife’ is expected to come off on Saturday, June 25 and Sunday, June 26v at the National Theatre. It would show again on July 2 and 3.

The play ‘I Slept With Your Wife’ is about a politician, Hon Yonkopa, who is planning to have an incredible time in Tamale with his side chick, Naa.

But just as they board the flight, Naa discovers that a man she helped destroy is also on the plane. To make matters worse, Venus, Hon. Yonkopa’s wife shows up on the plane before it takes off.

What ensues is the craziest flight ever, as the plane endures turbulence, faulty engines and passengers willing to spill the beans before they die.

‘I Slept With Your Wife’ is a hilarious roller-coaster thriller set in an aeroplane. It is a story that uncovers shady deals, preaches hope and turnarounds.

Ebo Whyte and the team at Roverman (his production house) are promising to give the audience the best experience especially because the play is likely to open within the interior of an aeroplane, with representation of isles of seats, overhead lockers, windows, cabin crew among others.

In order to achieve visual believability, other elements like sounds, movements, lights have been employed artistically. Airplane take-off sounds, turbulence sounds, airplane beep sounds, etc have all been simulated to achieve a realistic effect.

Theatre lovers can get a ticket for 100gh at the National Theatre or at the front desk of JoyFM. It will be showing at 4pm and 8pm.

Tags:
Ebo Whyte
I Slept With Your Wife
National Theatre