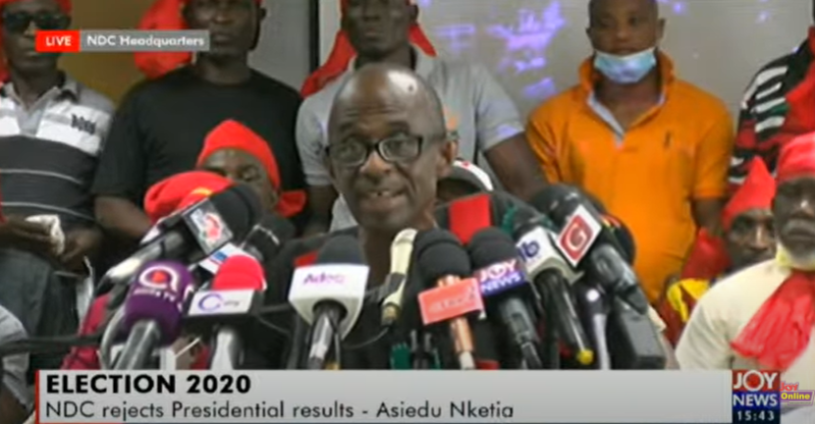 The National Democratic Congress’ General Secretary, Johnson Asiedu Nketia says prior to the Election 2020 results declaration by the Electoral Commission Wednesday evening, the NDC had petitioned the EC to resolve outstanding issues before any definite declaration was made.

According to Asiedu Nketia, this was done based on precedence set by the New Patriotic Party during the 2008 Elections when they petitioned the National Peace Council and the Electoral Commission to address their dissatisfaction with the results.

However, unlike in 2008 when the NPP’s petition was considered and swift steps taken to address their grievances, the NDC General Secretary said no such luxury was afforded his party this time around.

“We put together a petition to the commission expressing our reservations and asking them to call for a meeting at which we could all resolve the outstanding issues to pave way for the declaration of results that will be acceptable to everybody. To our utter dismay, they refused our petition…we were treated with contempt,” he said.

He added that, “The Commission proceeded to do a charade of a results declaration which made Nana Akufo-Addo the President-Elect in the 2020 elections.”

To this end, Asiedu Nketia stated emphatically at a press conference held today, December 10, that the NDC still stands by its decision to reject the results of the 2020 Presidential elections.

“I have to confirm that we still stand by our original position and that is to reject the presidential results as declared by the Electoral Commission,” he reiterated.

The NDC has stated its willingness to contest the results of the Presidential Election as well as some Parliamentary results.