ECG staff court public support in the fight against privatization 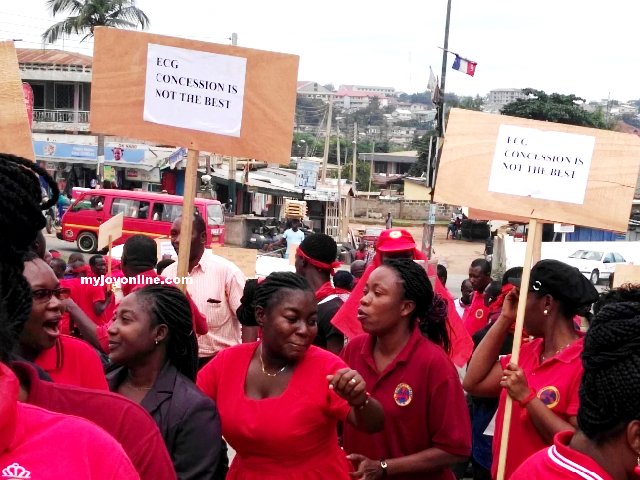 Workers of the Electricity Company of Ghana (ECG) are courting support from Ghanaians in protest of government’s decision to cede the company to a private investor.

Staff of the company who on are on a three-day sit-down strike across the country says they will persist until the citizenry joins them in the fight.

They say the proposed deal amounts to selling the company at the expense of their jobs and attendant bad impact on consumers.

ECG staff in the Ashanti Region spotting red outfits massed up at the regional office amid drumming, dancing and chants of disagreement on Friday.

They accuse the Millennium Development Authority (MiDA) of acting unilaterally against the will of Ghanaians the masses and power consumers in particular.

"But it’s as if government or MiDA is pushing its own agenda and what has to be done have not been done. They are still pushing through what they want.  Even if they want to go with PSP, there are better ways of doing it than what’s happening now”, he explained.

According to him, that decision taken by government is not in the interest of the country as far as power generation and distribution are concerned.

“We had a position paper and we were expecting that if they are listening, they will push ahead what we are proposed. At least sit-down and have a dialogue and discuss those issues but that is not being done. That has been pushed aside and they are continuing what they wanted to do which we think it’s not the best option for Ghana,” Mr Maclean has said.

He disagrees with suggestions that the sit-down strike will negatively affect productivity, arguing that the workers will put in extra effort to make up for the lost time after each day’s action.