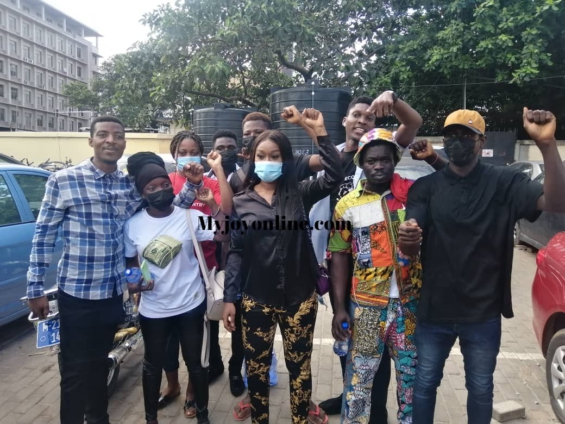 Actress Efia Odo and other campaigners of the #FixThe Country protest, have been granted bail.

They were arrested by the Police for unlawful gathering when members of the group thronged the premises of the court complex on Friday June 25, holding placards and taking photographs.

Efia Odo, narrating the circumstance that led to the arrest to JoyNews stated that, she and the other protestors were outside taking pictures whiles waiting for the court to deliver a ruling at 1:30 pm.

Expressing her disappointment, she noted that it is unlawful for personnel of the Ghana Police Service to prevent the campaigners from exercising their constitutional right as citizens.

“I was inside the courtroom and the judge called for a recess that we should come back at 1:30 to get our final verdict. So, as I came outside, obviously a lot of campaigners were outside to support and they wanted to take pictures.

“I am a public figure and they wanted to show their support. A lot of commotion was going on and all of a sudden we see police come with their guns as if we were criminals and they just aggressively pulled us in,” she told JoyNews’ Joseph Parker Wilson

Lawyers of the campaigners have, however, refused to disclose the conditions for the bail granted as well as givee any further update on the matter.

Meanwhile, an Accra High Court has dismissed an injunction application by the Ghana Police Service, seeking to restrain a street protest by #FixTheCountry campaigners.