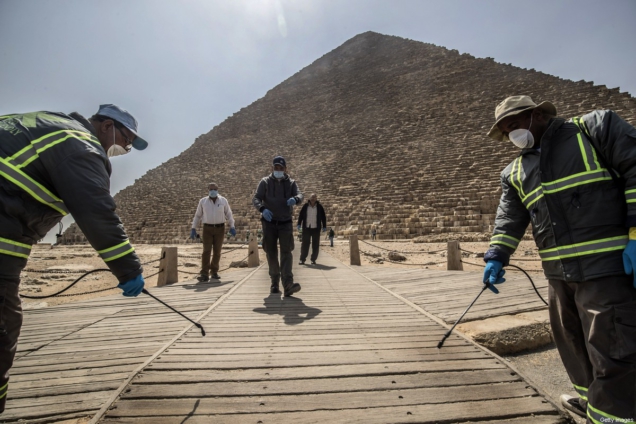 Egyptian police fired tear gas on Saturday to disperse a crowd of people who gathered in a village near the Nile Delta to prevent the burial of a doctor who died of coronavirus, according to local newspapers and footage on social media.

The interior ministry said 23 people were arrested, and the public prosecutor said his office will investigate the incident.

Footage posted online showed dozens of people gathered in front of an ambulance to stop it from entering the village’s burial grounds over fears that the body could spread the virus. They scattered as police fired canisters of tear gas.

Egypt’s Dar al-Ifta, the central authority in charge of issuing religious edicts or fatwas, said on Saturday that all those who die due to the coronavirus must be afforded their full religious burial rites and “honoured in death.”

The bodies of those killed by COVID-19 are washed carefully and placed in a sealed body bag so as not to spread infection, a health ministry spokesman, Khaled Megahed, told the Saudi-owned Egyptian broadcaster MBC Masr.

Egypt on Saturday registered 145 new cases of the coronavirus, bringing the total to 1939 cases including 146 deaths.

Its doctor’s syndicate said earlier that to date 43 doctors had contracted the disease and three had died.

The Arab world’s most populous country has enforced a nightly curfew, banned large public gatherings, and closed schools and universities in a bid to curb the spread of the virus.

While the government has placed several villages on lockdown after cases of the coronavirus were detected, it has said it would not be possible to do so for large metropolitan areas.