Election Headquarters: Why these market women will not vote in 2020 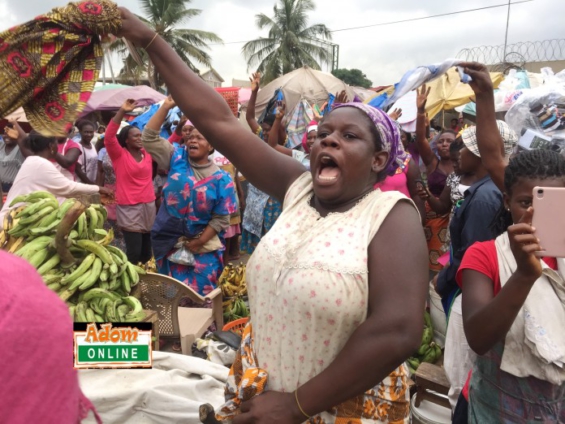 Some market women in the capital have threatened not to vote in the 2020 general election because both the previous and incumbent governments have failed to address their needs.

Speaking to reporters during The Multimedia Group’s Election Headquarters launch, Thursday, the market women explained that their decision is informed by poor waste management practices at the Makola market.

Also, they said exorbitant fees charged by the Accra Metropolitan Assembly (AMA) for selling in the market does not encourage them to vote any leader into officce.

According to them, it is the duty of the Assembly to ensure that the markets are clean but they rather charge them exorbitant fees for selling in the dirty market.

The filthy environment they say affect their businesses since they end up going home with little money than they would ordinarily have made.

The market women say government has only burdened them with huge taxes.

“Right now we are fed up and won’t allow ourselves to be deceived again, we don’t see why we should go and queue and vote for these leaders when they have failed to fulfil their promises most especially to the market women,” one of them said.

DISCLAIMER: The Views, Comments, Opinions, Contributions and Statements made by Readers and Contributors on this platform do not necessarily represent the views or policy of Multimedia Group Limited.
Tags:
2020 Elections
Election Headquarters