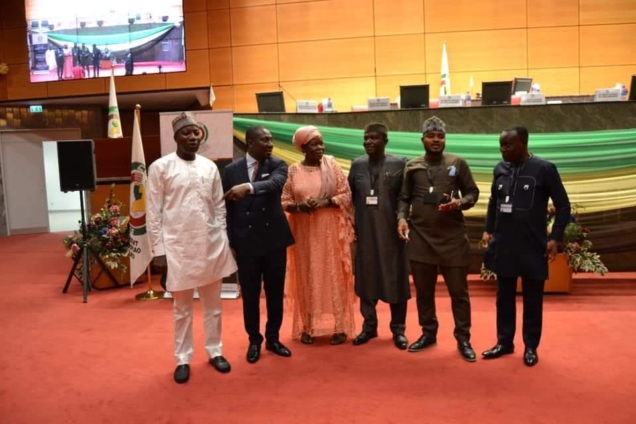 The impact of the coronavirus pandemic, the political tension before and after the 2020 general elections and threat of terrorism dominated Ghana’s report to the Economic Community of West African States, Ecowas parliament.

Deputy majority leader in parliament, Alexander Afenyo-Markin who leads Ghana’s delegation in his report praised the electoral commission for the conduct of the last election which saw President Akufo Addo retained power but left parliament hanged.

The two major political parties won 137 seats each but decision by the independent Member of Parliament for Fomena in the Ashanti region, Andrew Asimah gives the governing NPP a slim majority.

According to Afenyo-Markin most local and international election observers concluded that except for some isolated incidences which led to the death of few individuals, the electoral process was generally transparent and held in strict accordance with the electoral management laws and regulations of Ghana.

The menace of illegal mining found expression in the report. According to Mr. Afenyo-Markin the surge in the menace also known as Galamsey is a major threat to the environment and water bodies.

For him the persistence of the menace despite efforts by governments in the past is an indication of the gravity of the problem.’ The participation of foreigners particularly Chinese and nationals of some ECOWAS member states such as Togo, Ivory Coast, Nigeria, Mali and Burkina Faso have made the fight ore daunting’, he added.

He is however hopeful, recent intervention by government which led to the birth of Operation Halt will help rid the country’s forest reserves and water bodies of illegal mining.

On free movement within the sub-region, Afenyo Markin who is also the Member of Parliament for Effutu in the central region said Ghana has supported the establishment of border post at Akanu/Noepe with Togo and similar ones set up by Ghana, Burkina Faso, Cote d’Ivoire to facilitate the movement of goods and services.

On Covid, Afenyo-Markin described it as a national security threat not only to Ghana but countries all over the world.

He indicated that the existential crisis occasioned by the pandemic endangered government across the world to deploy a wide range of strategies including restriction on movement, border closure and enhanced Covid-19 testing among others.

‘In Ghana, the national security was instrumental in implementing a number of the strategies but more importantly government rolled out a number of interventions such as tax reliefs and other packages aimed at protecting the vulnerable in society and further supported small to medium scale enterprises against the economic effects of the pandemic,’ he noted.

The report also touched on children and gender issues, the activities of nomadic herdsmen, human right situation in Ghana, maritime security, the national health insurance scheme, media freedom, conditions in the country’s prisons among others.