Election Petition: Don't give up, we know what we are doing - Sammy Gyamfi to NDC supporters over dismissed applications - MyJoyOnline.com

Election Petition: Don’t give up, we know what we are doing – Sammy Gyamfi to NDC supporters over dismissed applications 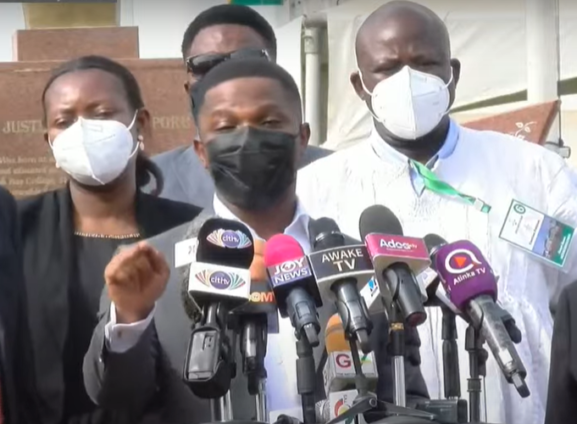 A member of John Mahama’s legal team in the ongoing election petition, Sammy Gyamfi is calling on all supporters of the National Democratic Congress (NDC) to remain steadfast despite the dismissal of several applications filed by the petitioner at the Supreme Court.

“Those who are crestfallen, those who are discouraged and sometimes call us, worried and disturbed saying ‘Why don’t you withdraw this matter?’, ‘You shouldn’t even go to court’.

His assurance comes after concerns have been raised by some party officials and aggrieved supporters of the NDC on social media.

According to them, the increase in the number of applications dismissed by the apex court is worrying as such, the petitioner, John Mahama should withdraw his filed petition.

However, Sammy Gyamfi indicated that they are in court because of “the love we have for Ghana, particularly that of the petitioner.”

Therefore, he urged all persons to rally behind former President John Dramani Mahama and not be perturbed by present developments in the ongoing election trial.

“Let us all be patient with the legal team as we go through the process. We are not abusing the court processes like some are suggesting and we have not defied the orders of the court,” he noted.

The Supreme Court on Monday, again dismissed an application for review to have the petitioner reopen his case to subpoena the First respondent, who is the Electoral Commission.

The 9-member panel of judges who sat for the hearing ruled that the review is being dismissed because the application is without merit.

Chief Justice Kwasi Anin Yeboah maintained the earlier ruling that the petitioner has not indicated how the evidence he intends to solicit from the EC Chairperson will help to determine the case.

Speaking on the matter, the NDC Communications Officer said the decision made by the apex court today will in no way blur the truth presented by the petitioner.

He admonished persons to dismiss the notion that when people come to court and their applications are dismissed it means they are wrong.

“No, what it means is that the court is right for the time being and it is what the court has said that will prevail.

“Now, we disagree with the court but whether we like it or not, what the court has said is the law and that is what will prevail. But posterity will be the judge of us all,” he concluded.