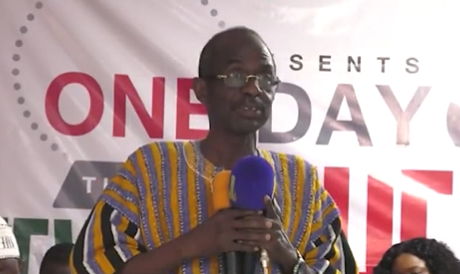 I haven’t had the benefit of the actual sound bite, so I will put my concern in the form of a question: is it true the NDC General Secretary, Asiedu Nketia, has ordered the party’s Members of Parliament that if slapping the 1st Deputy Speaker, Joseph Osei Wusu, will make him do the right thing, the Minority shouldn’t hesitate to do so (?)

Online news channels say the General Secretary was addressing the Ashanti Regional Youth Wing of the NDC in Kumasi on Sunday, February 6. Indirect quotes, Asiedu Nketia who is also a member of the Parliamentary Service Board, is reported as stating that “So long as impunity will not stop, resistance has been imposed on us as a duty. If a Deputy Speaker decides to vote and at the same time play the role of a referee, if slapping him will make him do the right thing, don’t hesitate”.

By General Mosquito’s logic, I, Enimil Ashon, would be within my rights to slap him, without recourse to the law if, in my personal opinion, I consider this utterance as an act of “impunity”.

I still do not know all the details of the offence of Abronye DC, Bono Regional Chairman of the governing NPP who was invited by the police and subsequently charged for alleging on the radio that former President John Mahama planned with Al Qaeda to stage a coup in Ghana.

The IGP deserves a pat for ordering such a rare action; rarer still that the worst the NPP chairman and others with plenty of political muscle in the governing party could do was to take their case to the media, courting public sympathy. Under some other IGP or in some other dispensation, a call from “the Castle” or Jubilee House would have been enough to set the party man free.

Kudos, IGP Dampare for such boldness in decisive law enforcement against the high and mighty.

However, an unanswered question is: has the attention of the police been drawn to Asiedu Nketia’s utterance? And till today, the IGP finds nothing wrong with it? Is there no law against incitement to crime, even after all the violence that was visited upon the Honourable House last December in which one MP was wounded?

Could politicians be this desperate! Never knew desperation could so cloud reasonableness. What is the difference between highly educated lawmakers and poor illiterates in a village who go to war over guinea fowl?

Who determines impunity and what is the action against impunity in the chamber in which laws are made?

Whether or not a Deputy Speaker can preside over deliberations and descend later to the floor to participate to vote is a matter of what the law says: it is a legal point of view in much the same way as when a Member of Parliament cannot be found to be served court processes.

In an NDC caucus where, as recently as the first few weeks of January 2022, there was the near tumult within the party – including direct accusations against the Minority Speaker for not being brash and pushful enough – leadership of the Minority caucus would count every charge from party headquarters as “order to act”. To do less is to show not only weakness but be a suspected fifth columnist.

The point of today’s column is a call to all patriots in the land to condemn all dangerously provocative statements coming from otherwise responsible citizens in leadership positions.

In the General Prologue to his ‘Canterbury Tales’, Geoffrey Chaucer wonders: “If gold rusts, what will iron do?” When statements such as Asiedu Nketia’s come from the mouth of so-called “role models” in the land, why do we express outrage when party macho men invade courts and issue threats to rape female Chief Justices?

At any rate, this is not the first time a government in the Fourth Republic is attempting to impose a tax.

On August 22, 2003, then Minority Leader, Alban Bagbin, led his side to boycott the debate on the National Health Insurance Scheme (NHIS) Bill.

On not a single occasion did anybody incite the party’s MPs to undertake acts as diabolical as physically assaulting a Speaker.

I am told Asiedu Nketia wants to be elected NDC chairman. It would be a shame if such a noble pursuit could drive such dangerous utterances in politicians.