Iran promised there would be “severe revenge” after Iranian military commander Qasem Soleimani was killed in a US drone strike. If there is retaliation Soleimani’s long-term deputy, Esmail Qaani, will be the one leading it.

The Quds Force is the overseas operations arm of Iran’s Islamic Revolution Guard Corps (IRGC), set up in the wake of the Iranian revolution in 1979 to defend the country’s Islamic system.

Gen Qaani, 63, was born in the north-eastern city of Mashad, Iran’s second most populous city and an important pilgrimage site for Shia Muslims. He joined the IRGC in 1980.

Like Soleimani, Gen Qaani is a veteran of the bloody 1980-1988 Iran-Iraq war, which pitted the forces of the new Iranian government against those of then Iraqi President Saddam Hussein.

Gen Qaani has said the friendship the pair forged came through the hardships of the conflict. “We are children of war,” Iranian media quoted him as saying.

After the war he joined the Quds Force and was stationed in Khorasan Province, which borders Afghanistan and Turkmenistan.

Little is known about his activities but it is thought that while Soleimani focused on the west, Gen Qaani looked after Iranian priorities in the east, such as combating drug smuggling and aiding Afghanistan’s Northern Alliance in its battles against the Taliban

Gen Qaani is also said to have performed more of a day-to-day, administrative role in the forces.

In a mark of his seniority in the organisation, Gen Qaani was sanctioned by the US in 2012 for his work funding the Quds Force’s operations around the world.

Soleimani worked to bolster the Iranian state’s influence in the Middle East, playing an active role in Syria, Iraq, Lebanon and Yemen. 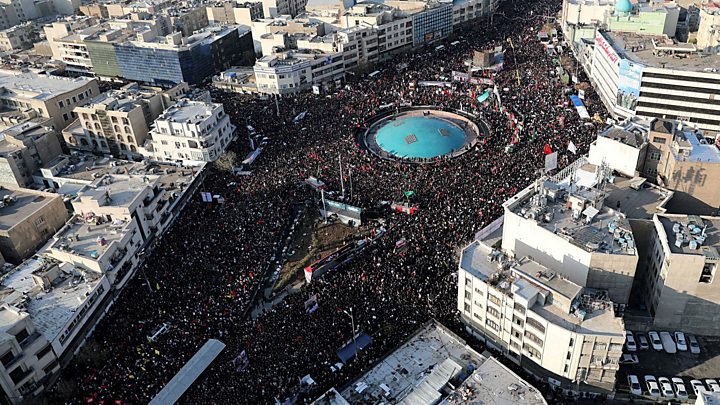 Mourners packed the streets in Tehran – and Iran’s supreme leader wept as he led prayers.

Gen Qaani’s challenge is to emulate his predecessor, a man hailed as a hero by many in Iran and someone widely seen as the most powerful person in the country behind the Supreme Leader, Ayatollah Ali Khamenei.

He quickly echoed promises of action from Iran’s leadership over Soleimani’s death.

“God the Almighty has promised to take martyr Soleimani’s revenge. Certainly actions will be taken,” he told state television.

While there are questions whether the new Quds Force chief can match Soleimani’s influence, analysts say the strength of the IRGC owes more than just to individuals.

“It is difficult to expect Qaani, the bureaucrat, to emulate his predecessor’s charismatic leadership,” writes Ali Alfoneh, a senior fellow at the Arab Gulf States Institute in Washington.

“That said, Qaani will exert influence nonetheless, owing to the institutional power of the Quds Force itself.”

“Qaani will hit the ground running,” tweeted Afshon Ostovar, an author on the IRGC and assistant professor at the Naval Postgraduate School in the US.

He said the IRGC “relies much less on individuals than many analysts believe”, adding: “Soleimani’s death will have an impact, but there will be no discernible change to Iran’s regional network or operations. Revenge aside.”