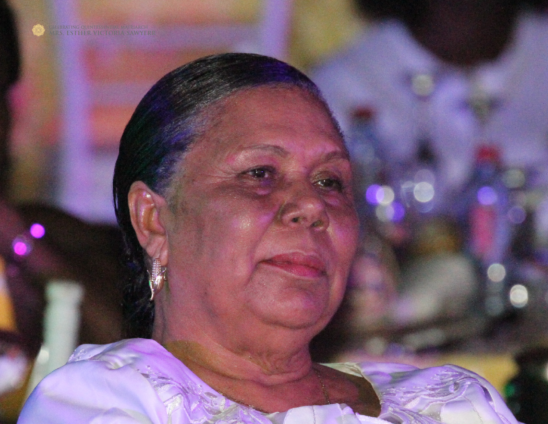 When she was three years old, Esther’s father was recalled to Italy with his brothers to be enlisted for war, where he lost his life. Her granduncle, Joseph Kwabena Bawuah also known as ‘Bawuah Timbers’, a renowned timber merchant in Kumasi took upon himself the role of her father and executed it honourably. Her formative years were, however, spent in Accra under the care of Madam Sophia Quartey aka Mother, who Esther’s children fondly referred to as Nanaa Kaneshie.

After her primary education at Bishop Girls School in Accra, she returned to the Ashanti Region where she continued her education at the St. Monica’s Secondary School, the famous Anglican school through which several of Ghana’s great women have passed.

On completion of her secondary school education, she was employed as a nutritionist at the Social Welfare Department in Kumasi. She always spoke about her time as a social welfare officer with pride and joy, especially the time she spent with women educating them on personal hygiene, nutrition and how to balance their diets to ensure that their children were not malnourished. She delighted in showing them varieties of dishes they could prepare from the limited staples available to them.

It was then, in 1960, that she caught the eye of the young, dashing, brilliant Chartered Surveyor, Henry Romulus Sawyerr. Esther’s family would not agree to the marriage. Those were the days when Ashantis did not take kindly to their own marrying into other ethnic groups. Furthermore, Harry already had six children, two of whom were overseas. Esther’s family saw this as unacceptable for the beautiful lady they considered their dishi3 (royalty), but Harry was not to be out-manouvred from marrying his true love. He pursued her with the zeal and passion he attached to matters he deemed important and finally managed to get one of her uncles to agree to accept her bride price. Finally, in 1961, they got married.

Esther, the young bride therefore started off her marriage with four of Harry’s children whom she took care off as her own, until they left for Nigeria. One of them, Leslie, stayed with her all through to his University days. He was affectionately referred to by family friends as “Esther bi Tettey’, meaning “Esther’s first born’. Esther eventually had seven children, Stephen, Valerie, Gilbert, Brenda, Olive, Angela and Rema.

Esther was everybody’s mother. Her family, her husband’s family, her friends who became family, her staff who were like her children, the vulnerable, disabled and the sick. Destitutes, who walked the street between Labone and Osu, would attest to this fact.

After raising her children, she continued to raise and nurture her grandchildren, and shepherded them through their academic studies including their homework and examination preparation. More importantly, she brought them up in the knowledge of Christ. What a blessing it was when most of them, by the grace of God, were at her bedside with prayers, songs, hymns and worship to bid her a Godly farewell into eternal life.

Even though Esther was named Awuraa Adwoa Serwaa, her husband and children called her Yaa Asantewa because she was a pillar of steel – the backbone of her late husband and all her children, grandchildren and extended family. After her husband’s death, she emerged as a fully-fledged warrior, standing staunchly in the forefront. A woman of her own mettle! A loving but exceptionally firm lady was able to take on all challenges on behalf of her loved ones, solving problems by the dozen and charting paths for those who were confused. A matriarch of no mean repute!

Esther was fearless and courageous. She always said it as it was – never mincing words – yet managing to couch it in a blanket of love and warmth that made it easy to take her advice and direction. The very epitome of Ephesians 4:15 KJV “that seeking the truth in love, may grow up into him in all things, which is the head, even Christ”. She had a lot of compassion, empathy and love for all who came into contact with her.

Her love for the NDC party was worn on her forehead for all to see. You could not be in her company for more than an hour without her steering the path to political discourse. A very astute politician, moving the chess pieces in the background with dexterity.

A strategist of no mean repute We dare say most of her husband’s success in the political arena was facilitated and supported by this great woman who stood unshakeably behind him with sound political advice.

Whatever her husband was interested in, she ensured that she researched on and participated in as fully as possible – be it football, chieftaincy or politics. This led to her deep love for Accra Hearts of Oak, the football club of which her husband was a patron for many years. She stepped up to her role as wife of Harry Sawyerr, the Akwamuhene of Otublohum, and delivered excellently. She always had a solution for any challenge

Esther was a quintessential self-styled doctor. Her children called her Dr Chuchunborga because she readily churned out diagnosis and prescriptions, which were always spot on. Her knowledge of health issues and medical interventions was amazing, to say the least. She was ever grateful to her doctor, Dr. Albert Akpalu, who was a fixture in her life and jokingly referred to as ‘her boyfriend’.

Osu Ebenezer became her home church, as she tirelessly raised funds for her Monday born group and for harvest sessions. She prayed and supported her pastors. In the last few years, she would slip in and out of the First Service noiselessly leaving a tangible presence but never drawing attention to herself. She was ever grateful to Reverend Andy Odonkor and Reverend Seth Ayettey who visited her regularly, prayed with her and helped to maintain her trust in the Presbyterian Church.

Her faith in God was unshakeable. She strongly believed that Christianity lay in deeds and actions, not words. She did not take lightly to people going to church and spewing forth seemingly Godly rhetoric when their actions were not Christ-like and when they did not help the poor and vulnerable.

She tirelessly impressed this on the minds and hearts of her children and grandchildren, to translate their belief and faith in God to tangible acts of kindness and love. She disliked intensely any form of cheating, and would rise up with strength on such occasions to ensure that wrongs were made right.

To sum up in the words of Rev Seth Ayettey, during the one-week observation of her passing, ‘She was a fine role model in marriage, in family, in service … She was a Queen at Heart. Everything she did was classy. She loved people. She laid down her life for others and her service was filled with joy.

She was a woman full of wisdom; a woman who respected everyone, high and low. She sacrificed her life for others and we thank God for this priceless life’.

Today, as we bid a tearful farewell to this gem of a mother, grandmother, sister, in-law, relative and friend, we give reverent thanks to God our creator for lending us Auntie Esther for eighty-one years and three months. For the lives she touched and the impact she made on all she came in contact with, we give God glory and pray that He will give her a resting place in His bosom.

Due, due due ne amanehunu