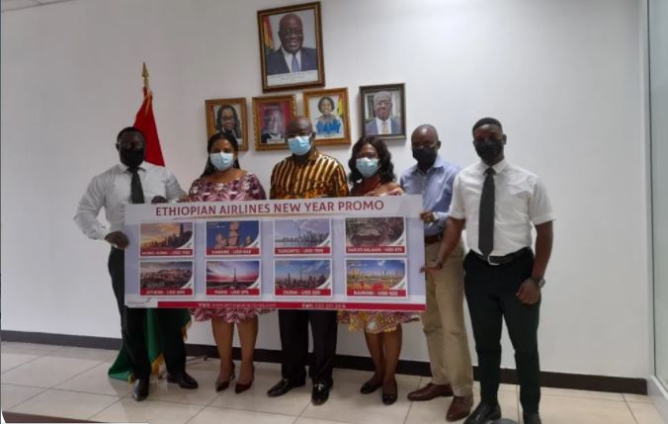 Under this promotion, which lasts until the end of March 2021, fares to various destinations around the world have been drastically reduced to make traveling affordable to Ghanaian passengers in these difficult times.

“We commend you highly for this initiative. This will make travelling cheaper for Ghanaians,” Mr. Adda said.

Rev. Stephen W. Arthur, Director of Economic Regulations and Business Development of the Ghana Civil Aviation Authority (GCAA) in his remarks, congratulated the Ethiopian team and called on other airlines to take a cue from this so as to promote a healthy competition which will aid in the industry’s revival.

“I think this is a novelty and is also laudable. We have been hearing demands for reduction in charges and the likes. Some of us have been a bit worried that we need a concerted effort from all stakeholders in trying to revive interest, trying to stimulate its demands, and also trying to restore confidence in air travel.

Although there are issues pertaining to purchasing power and ease of travel, at this moment, we cannot do too much about. So on behalf of the Director General, we commend your airline for such a great move as it shows a proactive effort as a stakeholder,” he said.