Some former workers of the Ghana Ports and Harbours Authority (GPHA) have appealed to the President to intervene and ensure that a severance package due them after they opted for a voluntary redundancy exercise in 2002 is paid.

According to them, the GPHA in 2002 under a World Bank-funded project dubbed “The Gateway Project” embarked on the voluntary retirement exercise.

A total of 1500 staff and 4195 non-staff opted for voluntary retirement under the exercise.

They said per the redundancy programme, each worker was to receive a projected amount of not less than $31,000 but they received amounts ranging from ¢600 to ¢2,400.

At a press conference in Accra on Wednesday, convenor for the group, Laud Nsiah Laryea, said all efforts to have the monies paid them by the management of the GPHA have proved futile, hence the need for the President to intervene to bring finality to the matter.

“We are going through pain and agony. Most of the workers are now old and weak with many others died as a result of the pain this issue brought to them. It is sad for us to have worked to develop this country only to be paid back this way,” he said.

“We have petitioned the President on two occasions but we are yet to get a response from him. So we are by this means calling on him to intervene for our rightful entitlements to be paid to us so as to ameliorate our pain and agony,” he added.

The World Bank in 1998 approved a $50million credit for the Ghana Trade and Investment Gateway Project which sought to among other things increase the competitiveness of Ghanaian products in the global market.

The credit was disbursed on a standard International Development Association (IDA) terms with a maturity of 40 years, including a 10-year grace period. 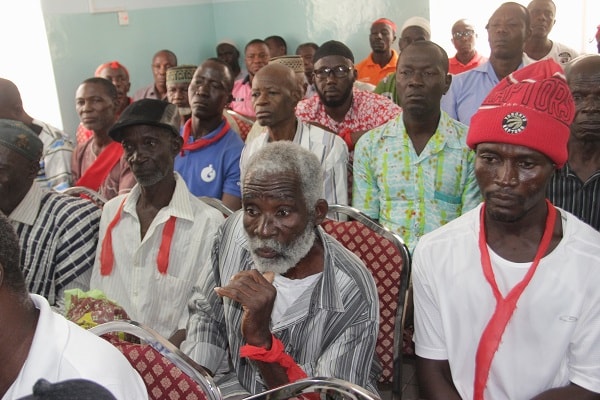 Mr Laryea said they had enough evidence to prove that they were short-changed by the management of the GPHA given that the project was “entirely funded” by the World Bank with no local support and that the monies they received were below what the World Bank had given.

He said a similar exercise carried out in Nigeria saw workers in that country receiving up to $28,000 as severance package and considering the quantum of work they did at the port, they should have received higher amounts.

He said another exercise carried out by the GPHA in 2014 saw the last group of workers who opted for it receiving an amount of ¢350,000.

“We deserve the entitlement we are seeking because in our case, the World Bank-funded the exercise without local funding and we can prove beyond a reasonable doubt that we should have received more than we were given,” he said.

“As a result of this fraudulent act, we filed a suit against the company at the Tema High Court in 2003 and obtained divine justice handed by Justice E.K. Mensah who on January 6, 2005, ruled and ordered the company to go and pay us,” he said.

He noted further that ex-workers have since been engaged in a legal battle with the management of the GPHA.

“In our burning desire to ensure justice is done in this life-threatening case which has already murdered over 600 of our colleague ex-workers, we stepped up our effort at the Supreme Court. We petitioned the then Chief Justice, Her Ladyship Theodora Georgina Wood on a number of occasions to intervene in this case and find an amicable solution to the impasse so as to pay us our rightful emolument,” he added.

According to him, in 2014, the then Chief Justice Georgina Wood dismissed the suit and asked the parties to settle the case out of court.

“But unfortunately, this order became a stalemate as a result of the authority’s adamant position as they claimed victory in the case,” he said.

Mr Laryea said if steps were not taken immediately to pay the monies due them, they would be compelled to take to the streets to drum home their demand.

“Without a positive response from the authority in a week from now, there would be a massive demonstration on the streets of Accra as our compatriots from Takoradi will join in this effort.”