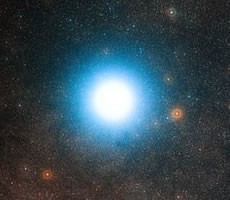 Astronomers have found the nearest planet outside our Solar System, circling one of the stars of Alpha Centauri just four light-years away.

The planet has at minimum the same mass as Earth, but circles its star far closer than Mercury orbits our Sun.

It is therefore outside the “habitable zone” denoting the possibility of life, as the researchers report in Nature.

However, studies on exoplanets increasingly show that a star with one planet is likely to have several.

At the very least, the work answers the question first posed in ancient times about planets around our nearest stellar neighbours.

The closest star to the Sun is Proxima Centauri, which is believed to be part of a three-star system that includes the brighter stars Alpha Centauri A and B.

The planet was found near Alpha Centauri B by the Harps instrument at the European Southern Observatory’s La Silla facility in Chile.

Like a dance between one enormous and one tiny partner, as an exoplanet orbits its much larger host star, its gravity causes the star to move in a small orbit.

Harps and instruments like it measure the subtle change in colour – the redshift or blueshift – of the host star’s light as its orbit moves it slightly closer to and further away from Earth.

What has delayed this finding is that because Alpha Centauri is itself a complicated system of stars orbiting one another, the effect of a comparatively tiny planet is difficult to detect.

But careful measurements over four years showed that the planet whips around Alpha Centauri B in just 3.6 days, and is estimated to have a surface temperature of about 1,200C.

Many planets in similar orbits are “tidally locked”, meaning the same side is always facing the host star, but further observations will be required to examine the planet further, finding out for example if it has an atmosphere.

Since the very first planets outside our solar system were discovered in the early 1990s, the hope has been to find an “Earth twin” – a planet like ours, orbiting a star like ours, at a distance like ours.

The new planet around Alpha Centauri B matches Earth only in terms of its mass – making it among the smallest exoplanets we know of.

But in a catalogue with hundreds of confirmed planets and thousands of planet candidates added since 1992, it is otherwise unremarkable – except for its proximity.

“Alpha Centauri B is of course a very special case – it’s our next door neighbour,” said Stephane Udry of the Observatory in Geneva and senior author of the paper.

“So even if the discovery just stands perfectly normally in the discoveries we have had up to now, it’s a landmark discovery, because it’s very low-mass and it’s our closest neighbour.”

Marek Kukula, Public Astronomer at the Royal Observatory Greenwich, said that beyond that, the planet’s very existence makes a tantalising suggestion.

“Everything that we’ve discovered in the last few years tells us that where we find one small, rocky planet there are likely to be others,” he told BBC News.

“I think the odds are very good that there may well be other planets in this system a little further out, perhaps a little more comfortable temperatures – so I think the hunt is on.”