Famers’ Day celebration: We need to move from ‘Kuay3’ to ‘Kuadwuma’ – Sekyere Chief 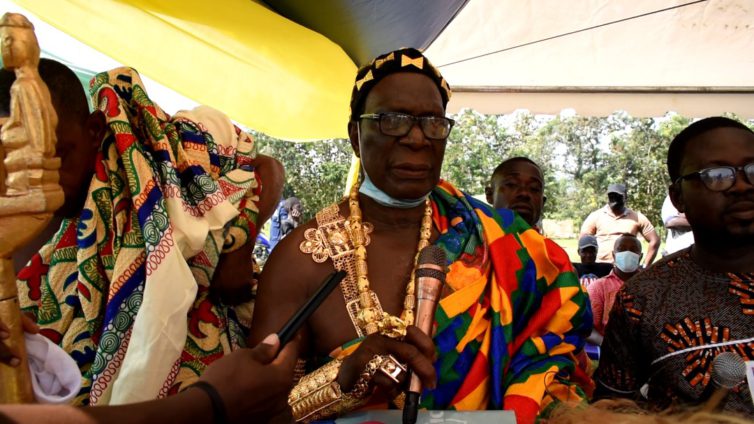 The Chief of Akyim Sekyere in the Atiwa East District of Eastern Region Dr Nana Owusu Takyi has entreated people to rephrase the name ‘Kuay3’ to ‘Kuadwuma’ since it’s a full-time job and it entails a lot to help people.

Speaking on Nkawkaw based AgooFM during the 37th celebration of Farmers’ Day of Atiwa East held at Akyem Sekyere, Nana Takyi said in Ghana, the name ‘kuay3’ sometimes restricts the nature of farming not to be seen as a professional job compared to how farming is been seen in abroad.

According to him, people need training on farming for it to be seen as a better job field which will attract others to engage in it.

He further said in Africa, naturally women engage in farming more compared to men and they know how to groom it better adding that ‘I am not surprised seeing females winning the district best farmer back to back.’

The district has seen two women winning best farmers thus 2020 and 2021. In 2020, Evelyn Vanderpuije was adjourned best farmer and Abiba Ibrahim was named best farmer for the year 2021.

Speaking on the importance of the Farmers’ Day celebration generally, he said the celebration is mainly to motive and boost the confidence of farmers and to show how much the country cherishes them.

Meanwhile, he said the creation of “youth best farmer” was coined just to motive and recruit more youth in the farming business since the country’s population is full of energise youth.

Member of Parliament for Atiwa East Abena Osei-Asare on her part said this year’s celebration marks their fourth time of celebration as a district.

She later lauded the farmers for such great things they are providing for the country, especially raw materials for various factories.

She further stated that the president’s promise of providing insurance for cocoa farmers is on course.

“There are a lot of things you the farmers are doing to help the government same as the government who is also doing a lot to help farmers as well. I, therefore, congratulate all farmers for the good works you are doing, Atiwa East can now boost a lot of plantation,” she added.

She pledged support from herself and the government.