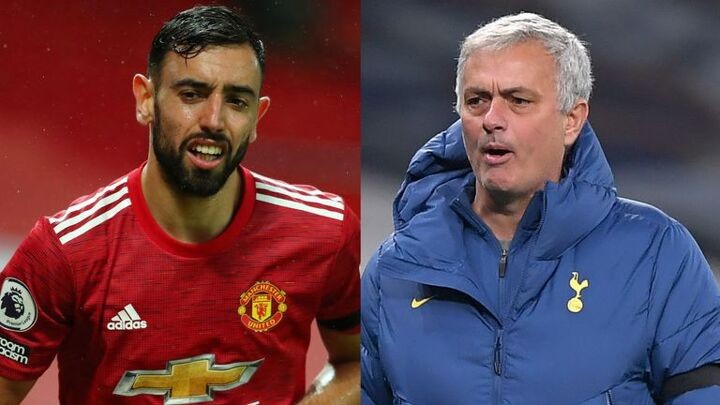 Manchester United midfielder Bruno Fernandes has been named Premier League Player of the Month for November, with Tottenham boss Jose Mourinho named Manager of the Month.

Fernandes scored four goals in as many Premier League games for United last month, including a brace in the 3-1 win at Everton on November 7.

The Portugal international also scored the winner in a 1-0 victory over West Brom on November 21, before ending the month with another goal in a 3-2 win at Southampton on November 29.

That result at St Mary’s helped United move back into the top half of the table and Ole Gunnar Solskjaer’s side are now sixth in the Premier League, following their 3-1 win over West Ham on Saturday.

Fernandes has now won the Premier League’s Player of the Month award three times since his arrival in English football in January, having also claimed the award twice last season – in February and June.

The 26-year-old now has 11 goals in 17 games this season in all competitions, after scoring in Tuesday’s disappointing 3-2 defeat to RB Leipzig in the Champions League.

Mourinho named Manager of the Month

Mourinho has been named Manager of the Month after guiding Tottenham to three wins and a draw from their four Premier League games in November.

It is the fourth time he has won the individual award – and the first since winning it with Chelsea in 2007.

Tottenham started the month with a 2-1 win at home to Brighton on November 1 before beating West Brom 1-0 at the Hawthorns on November 8, courtesy of a dramatic late winner from captain Harry Kane.

Spurs extended their winning run with a 2-0 victory over Manchester City on November 21 before ending the month with a 0-0 draw against Mourinho’s former club Chelsea on November 29.

That run helped Tottenham move to the top of the Premier League, where they remain ahead of Liverpool on goal difference after beating Arsenal 2-0 in the north London derby on December 6.

“For me it is not manager of the month – it is team of the month,” said Mourinho, when presented with the award.

“I believe it is about us as a team, it’s about the results that we had in November. It’s not about me.

“If it was about me, it would have to be for the coaching staff because without the other guys, it wouldn’t be possible.

“I don’t feel it as an individual award – I always feel it belongs to the team, to the results that we did.

“If we didn’t have three victories and one draw at Stamford Bridge in November, for sure we wouldn’t have any chance to win it.”