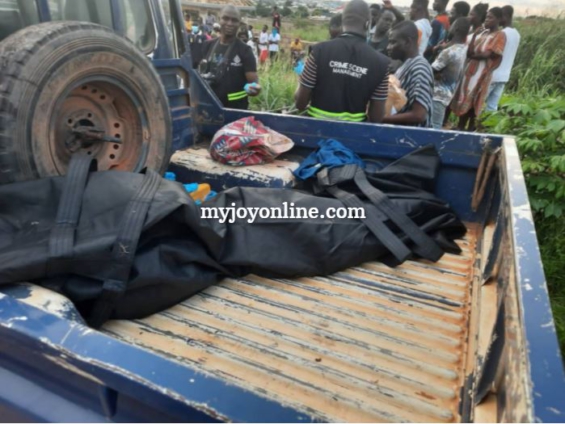 It has now emerged managers of Power Health Products Limited at Feyiase New Site aided the arrest of their factory hand suspected to have murdered a driver, at Feyiase in the Bosomtwe District of Ashanti region.

Managing Director, Akomea Sakyi, says he led police to apprehend Rashid Ibrahim from his residence on Sunday, July 9, 2021, few minutes after residents discovered the decapitated body of the deceased.

The move, he says was to enable the suspect to assist with police investigations, after a resident claimed to have seen him with the deceased a few minutes before his murder.

According to Mr Akomea who has been explaining to JoyNews how the suspect was arrested, his action to aid his arrest was borne out of patriotism and safety for the entire working staff.

“They (police) decided to pick Rashid up and they didn’t know where to find him; I said I know where he lives, he is my employee so I help them to locate his place and the next thing I heard, he had been arrested and eventually, he confessed to the crime,” Mr. Akomea revealed.

Explaining how Rashid became connected to the crime, he said he was first approached by a resident who claimed to have seen him and the deceased in the vicinity.

“We wondered who might have done this. We were trying to assist the police as much as we could. Just as I was about leaving the company premises, my security man told me a neighbour of ours says he saw two people leaving the car and passing close to the factory and then, they went into the bush. So he suspected that they may be responsible for the death of the person,” he said.

“But he knows one of them and doesn’t know the other. And then he mentioned Rashid and I said what?

“He said he since Rashid is my employee, he wanted to discuss with me before he involves the police. I said well, the police don’t conjure magic in finding culprits; they depend on information. So if you have this information, you have to give it to them.”

He further narrated that; “despite the fact that he is my employee, if he could do this to somebody, he could do it to any other person. So he agreed and I looked for the District (Police) Commander,” he said.

“We all presume he is innocent until a court finds him guilty. We are even thankful it didn’t happen to our staff because he is here with them and he needed a head. There are so many heads here. He could have taken any head from this place,” Mr Akomea added.

Thirty-two-year-old Rashid has been working at Power Health Products Limited as a factory hand since 2018.

Managers say the jovial but frail-looking man has been kept at the company on compassionate grounds because of ill-health.

He reported to work on Saturday and returned to the vicinity the following day to allegedly carry out his plans, about 150 meters from the office. His colleagues are shocked at his action because he is calm and unassuming.

Akomea Sakyi says everyone at the company received news of Rashid’s involvement with shock.

“We didn’t have any reason to suspect he could do this. Everybody received this news with shock. Indeed, we couldn’t believe this”.

Rashid, who has since 2018 kept in the company on humanitarian grounds because of his ill-health is described as a cool but jovial guy.

“He was employed here in 2018 as a factory hand. He is a cool guy, very jovial and he moves with everybody,” says Mr Akomea who was told of the incident on Sunday afternoon said.

The employers led police to the residence of Rashid Ibrahim to effect his arrest.

Meanwhile, Rashid and two others have been remanded by the Kuntenase District Court on murder and abetment charges on Thursday.

DISCLAIMER: The Views, Comments, Opinions, Contributions and Statements made by Readers and Contributors on this platform do not necessarily represent the views or policy of Multimedia Group Limited.
Tags:
Feyiase driver's murder
Kuntenase District Court
Rashid Ibrahim