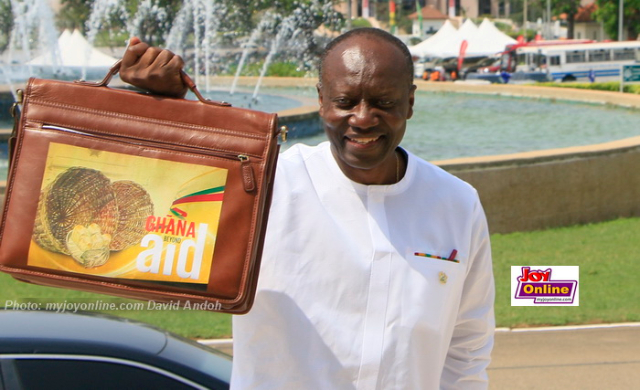 As the nation waits for the Minister Thursday morning to present the 2018 Mid Year Budget Review to the Legislature, we present below the highlights on what he presented as the expenditure and revenue targets from August to December 2017.

In fulfilment of the President’s promise, Government has:

-abolished the 1 percent Special Import Levy which was imposed mainly on imported raw materials and machinery;

-abolished the excise duty on petroleum to reduce the excess burden on final consumers;

-reduced the special petroleum tax rate from 17.5 percent to 15 percent to mitigate the excess burden on final consumers;

-abolished the 5 percent VAT flat rate on the sale of real estate;

-exempted from tax, the gains from realization of securities listed on the Ghana Stock Exchange;

-replaced the 17.5 percent standard rate with the 3 percent flat VAT/NHIL rate for supplies by retailers and wholesalers; and

Updates on Macroeconomic Developments in 2016

-real GDP growth was 3.5 percent, against the provisional estimate of 3.6 percent;

-deficit on commitment basis was 10.9 percent of GDP up from the provisional figure of 10.3 percent;

-Real GDP Growth for first quarter was6.6 percent  against 4.4 percent for the same period in 2016;

-Agriculture was 7.8 percent against 5 percent for the same period in 2016;

-Government to eliminate all arrears by end 2019 following the outcome of an audit of the outstanding commitments generated as at end 2016 and institute stringent measures that will prevent the accumulation of new ones.

-The primary balance recorded a surplus of 0.6 percent of GDP, against a target deficit of 0.01 percent

-Gross Foreign Assets to cover at least 3 months of imports of goods and services, same as originally programmed.

Revisions to Total Revenue and Grants, and Expenditure

-Total Revenue and Grants has been revised downwards by 0.9 percent of GDP from GH¢44.5 billion to GH¢43.1 billion

-total Expenditure has also been revised downwards by 1.1 percent of GDP from GH¢58.1 billion to GH¢55.9 billion

Key revisions to expenditures include:

-0.3 percent of GDP (GH¢553.2 million) reduction in total transfers to Other Government Units, which comprise all statutory and earmarked funds; and

-Government to introduce a numerical fiscal rule to guide implementation of Fiscal Policy.In this regard an amendment to the PFMA to limit fiscal Deficit within a range of 3 to 5 percent of GDP for any financial year to be brought to Parliament.

Planting for Food and Jobs’:

-About 185,907 farmers out of 200,000 farmers targeted for the 2017 cropping season were registered and being provided with seeds, fertilizers and extension services to improve their yields.

-1,896 hectares of maize, rice, soybean, sorghum, onion, pepper and tomatoes is under cultivation. An additional 569 hectares will be cultivated before the end of the year to bring the total to 2,465 hectares.

-822 agricultural extension officers were recruited and posted to 187 districts across the 10 regions of the country.

-10,000 hand pollinators were trained and deployed to assist farmers.

-Free SHS ready to take-off in September this year as planned.

-interventions being implemented to ensure that the quality of education is not compromised:

-Provision of four core textbooks for all first year students;

-Rationalization of teacher deployment and training at the SHS level;

-Establishment of robust school inspection and accountability systems; and

-One hot meal a day for day students.

-Construction of the Tema to Akosombo rail line has commenced and it is projected to be completed by mid-2020.

-Over 60,000 unemployed youth to be employed under the Security, Afforestation, Graduate internship, Paid internship and Sanitation modules

-Over 500,000 job opportunities in oil palm plantations and regulated small-scale mining will be created under a five-year Multilateral Mining Integration Project (MMIP) project.

-The One District, One Factory; One Village, One Dam; Small Business Development; Agricultural Infrastructure; “Water for All” Projects; and Sanitation Projects to take off before the end of the year

Formalising the Economy and Financial Inclusion

-Government is on course to completing the National Digital Property Addressing System. The issuance of National Identity Cards will also commence in October 2017. The Interoperability project is scheduled for completion by end 2017

-Focus of government in the first half of the year was to stabilize the economy and re-establish the principles of good economic governance.

-Measures to strengthen revenue performance to enable government achieve its objectives are being put in place.

-In the spirit of prudent economic management, expenditures have been revised, however promises made to Ghanaians will not be compromised.