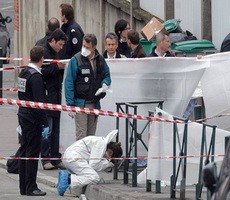 The Frenchman suspected of a spate of shootings in the Toulouse area planned more killings, prosecutors have said.

Merah, who says he was trained by al-Qaeda, is suspected of murdering three soldiers and four Jewish people.

Police have surrounded his flat and are trying to persuade him to surrender. He is said to be heavily armed.

Earlier reports said he had been captured, but officials later rebuffed the claims.

The killings took place in and around Toulouse in three separate incidents earlier this month.

On 11 March, a soldier was shot and killed while waiting to see a man about selling his motorcycle.

Days later, two soldiers were shot and killed, and a third was wounded while waiting at a cash machine.

Then earlier this week, three children and an adult were shot and killed outside a Jewish school.

The four Jewish victims were buried in an emotional funeral in Jerusalem earlier.

In a news conference, Mr Molins said Merah had planned to kill a soldier later on Wednesday and also had plans to target the police.

“If he’s telling the truth, he would have left his house this morning and he would have once again killed any soldier that he came across,” the prosecutor said.

Mr Molins said the suspect had expressed no regret for the killings, but had said he wanted to kill more people and “bring France to its knees”.

President Nicolas Sarkozy has attended a memorial at a military base in nearby Montauban for the three murdered soldiers.

He earlier told Jewish community leaders that the gunmen had been planning more attacks before police had surrounded his apartment block.

Police moved into Merah’s block after two officers were shot at when they tried to get into his flat.

The five-storey block of flats was evacuated earlier, and police were also moving residents of nearby buildings.

Hundreds of officers are now stationed outside the block.

Elsewhere in the city, police are hunting for accomplices and have detained several members of his family.

His mother was taken to the scene in the hope that she could persuade him to surrender, but she told police that she had no influence over her son.

Negotiators have been talking to Merah all morning, but officials said he appeared to have no particular demands.

The suspect has said he acted to “avenge Palestinian children” and said he would give himself up.

Merah claimed to have received al-Qaeda training in Pakistan’s Waziristan area, and also said he had been to Afghanistan, prosecutors said.

Afghan officials told the BBC he had been jailed in Kandahar for planting bombs in 2007, but escaped in a Taliban-led break-out in 2008.

Other Afghan sources cast doubt on the claims, saying the man jailed in Kandahar might have been a different person with the same name.

He gave no details of the first visit, but said that during his second trip last year, Merah was captured by Afghan forces and handed to the Americans, who put him on a plane back to France.

But American officials told CNN that US forces had not dealt with Merah, and that the Afghans had handed him to French forces, who had returned him to France.