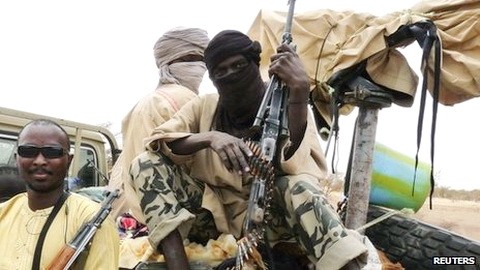 “Several hundred” Islamist militants have been killed since France launched an offensive in Mali last month, the French defence minister has said.

Jean-Yves Le Drian said they had been killed in airstrikes and direct combat with French troops.

Meanwhile, Foreign Minister Laurent Fabius has said that France may begin pulling out of Mali as early as March.

In a newspaper interview, he said that “if everything goes as planned, the number of troops should diminish”.

France has an estimated 4,000 troops in Mali and officials from multilateral institutions and dozens of countries have been meeting in Brussels to discuss how to replace them.

The defence minister said the last major town in northern Mali to remain in the hands of the rebels, Kidal, was now under French control.

The militants died in French airstrikes on vehicles carrying fighters and materials, or in ground fighting in the town of Konna at the start of the campaign and later in the town of Gao, Mr Le Drian said.

He said French troops had inflicted “great damage on the jihadist terrorist groups”, saying “several hundred, a significant number” of Islamist fighters had been killed.

The BBC’s Thomas Fessy in Mali says it is unclear how the French made their assessment of the numbers of dead.

France has suffered only one fatality so far – a helicopter pilot killed at the beginning of the operation.

Mr Le Drian said Malian forces had also taken prisoners – “some” high-ranking militants – whom he said would “have to answer to Malian courts and international justice”.

French forces continue to carry out airstrikes in mountains north of Kidal where Islamists have taken refuge – and where some or all of seven French hostages are being held, our correspondent reports.

Earlier, the French military said some 1,800 soldiers from Chad had entered Kidal. Mr Le Drian said the town was now under the control of French forces with “the support of African and in particular Chadian forces”.

Meanwhile, pro-autonomy Tuareg rebels in Mali said they had occupied the north-eastern town of Menaka, but their claim could not be verified.

Analysts say the rebels – who initially joined forces with the Islamist rebels in their fight for an independent state in northern Mali, but later fell out with them – are seeking to maximise their territorial claim on the region ahead of talks.
Mali’s future

The French intervened in Mali in January, fearing that al-Qaeda-linked militants who had controlled Mali’s vast north since April 2012 were about to advance on the capital, Bamako.

“We will continue to act in the north where some terrorist havens remain,” he told Metro newspaper.

“I think that starting in March, if all goes as planned, the number of French troops could be reduced,” Mr Fabius told the daily Metro.

Meanwhile, officials from the UN, EU, African Union, the World Bank and dozens of nations met in Brussels to discuss Mali’s future.

They are considering how democratic elections can be held in July, as well as the financing of an international military force and humanitarian assistance.

“The point now is to win the peace,” French Development Minister Pascal Canfin said at the close of talks, according to AFP news agency.