French Open 2021: Serena Williams knocked out in fourth round by Elena Rybakina 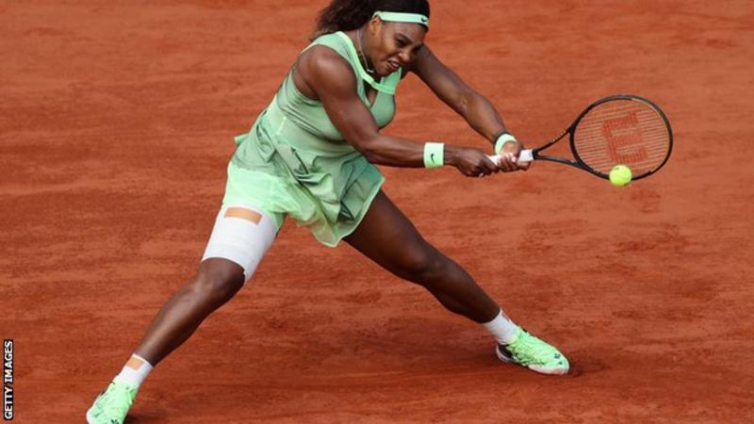 Serena Williams is out of the French Open after a shock 6-3 7-5 defeat by 21-year-old Elena Rybakina.

In an absorbing match, the 23-time Grand Slam winner was outmuscled by the Kazakh, who will now seek to take advantage of an open women’s draw.

The American tried to lift her level but instead became the latest top-10 seed to depart the women’s singles.

Her next chance to equal Margaret Court’s record of 24 Grand Slam singles titles comes at Wimbledon from 28 June.

“It was definitely close,” Williams said. “There is literally a point here, a point there, that could change the whole course of the match.

“I’m not winning those points – they could literally change everything.”

Questions about how long she can keep competing at Grand Slams are inevitable but the 39-year-old is not giving much away.

“I’m definitely not thinking about it at all,” she said.

“I’m definitely thinking just about other things but not about that.”

Williams, 39, has not won a Grand Slam title since the Australian Open in 2017 and with seeds tumbling throughout this French Open, the draw seemed to be opening up for her.

Indeed, her victory over compatriot Danielle Collins on Friday was impressive and she seemed to be getting better as the tournament progressed.

However, on the day her contemporary Roger Federer pulled out of Roland Garros to take care of his body before Wimbledon, it felt like a changing of the guard on Court Philippe Chatrier.

Williams never got to grips with Rybakina’s ferocious strokes – she did not win a point on the Kazakh’s serve until the third game and that was from a double fault.

She briefly raised her level at the start of set two to pin back her opponent but unforced errors crept back and Rybakina seized control.

It is rare to see Williams given the run-around by power-hitting, a trait in the women’s game that her 15 years of supremacy established.

But, with the array of talent emerging, doubts grow about how long Williams can compete at the highest level and if she will ever attain the Grand Slam record.

Who wants to win the women’s singles?

For 21-year-old Rybakina, this landmark win may be the start of something special as she enters the quarter-finals of a Grand Slam for the first time.

She was two months old when Williams won her first Grand Slam title in New York in September 1999 and was not overawed by her first appearance on a show court and her first match against Williams.

The world number 22’s exhibition of giant hitting kept her illustrious opponent penned back in a bruising first set.

After Williams broke her in game seven, Rybakina immediately responded to break back and take the first set on her fourth set point.

Nerves crept in during a competitive second set with both players trading unforced errors and breaks of serve.

But, after gifting Williams a way back into the match with two wild forehand errors, she found her form again to break to love and serve for victory in impressive fashion.

There are only three players left in the draw ranked higher than her and two of them, Sofia Kenin and Maria Sakkari, play each other in the fourth round on Monday.

Her quarter-final opponent will be Anastasia Pavlyuchenkova and after that, it would be a match with either of the unseeded duo Paula Badosa and Tamara Zidansek in the semi-finals.