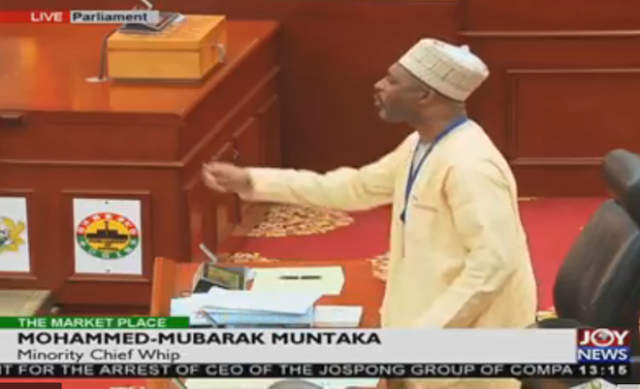 Minority Chief Whip, Muntaka Mubarack, has called for the legalisation of motorbikes [Okada] for commercial transportation.

Addressing Parliament Thursday,the Asawase MP argued, such a decision will provide jobs for thousands of youth.

“Let us review the law to accommodate okada operators by mainstreaming them into our national transport system so that they can be identified, registered, licensed and policed to work within the road traffic regulations,” he said.

His suggestion has received the backing of other MPs including Madina MP, Saddique Abubakar, who shared a personal experience of how the use of Okada got him to a meeting on time.

The full statement is published below.

In 2012, this Honourable House gave its blessings to a legislative proposal by Government to pass the Road Traffic Regulations, 2012 (Legislative Instrument 2180), to regulate road transport in this country. Sections 128 (1), (2) and (3) of the L.I. 2180, prohibit the use of motorcycle or tricycle, or what has been popularly known as “Okada” for commercial purposes.

For the purposes of emphasis, Mr. Speaker, I crave your indulgence to state the provisions: Section 128 (1) of L.I. 2180 states- “The licensing authority shall not register a motorcycle to carry a fare-paying passenger.”

Section 128 (2) states – “A person shall not permit a motorcycle or tricycle which that person exercises control to be used for commercial purpose, except for courier and delivery services.”

Section 128 (3) states – “A person shall not ride on a motorcycle or tricycle as a paying passenger.”

The “Okada” business in our part of the world has been traced to Lagos the old administrative capital of Nigeria, where motorbikes and tricycles were employed as a solution to address the notorious traffic congestions in the city.

Indeed, as it is a public knowledge now, the traffic congestions experienced in Lagos city was one of the utmost reasons why the federal government of Nigeria decided to move the capital to Abuja in the heart of the nation.

The use of motorcycle or tricycle as a quickest means of reaching offices and parts of the Lagos city was a success, in that people who engaged in them reached their destinations on time and with ease.

Because of their services, the patrons liken the movement or the operations of the motorbikes to that of an Okada Airline, the first domestic airline in Nigeria which was established in the eighties by Mr Gabriel Egbinedion, one of Nigeria's first known millionaires who hails from Okada village in Edo State.

With the passage of time, the Okada business spread from Lagos to other parts of the country because of its convenience. The business gradually spread across the West African Sub-Region in countries such as Togo and Benin and some parts of Africa.

The ubiquity of motorcycle or tricycle -taxi services in Africa is clearly manifested in the proliferation of local names to describe them. They include okada or Adedeta (Ghana), okada or alalok (Nigeria), kabu-kabu (Niger), boda-boda (Uganda and Kenya), zemidjan (Benin), oleyia (Togo), and bendskin (Cameroon)

The motorcycle or tricycle businesses are also found in some parts of the world particularly South East Asia where traffic congestion is challenge to city authorities and to also address the gap in public transport needs of people, particularly the rural folks.

In Ghana, the situation is not different. motorcycle or tricycle have become the preferred means of transport for rural folks because it is the easiest and cheapest means by which they ply their businesses.

In the five regions of the North, Bono region, Ahafo region and the northern part of the Volta Region for instance, the use of motorcycle or tricycle occupy critical part of their daily activities so much such that farmers, teachers, nurses, social workers and many others, rely on them to get to their places of work.

Farmers use motorcycle or tricycle on daily basis to cart food stuff to and from their farms, while nurses and other health workers find them as the most efficient means to access the hinterlands to dispense healthcare services. In recent times however, there have been a rise in the use of motorcycle or tricycle for commercial purposes in towns and cities such as Accra, Kumasi, Tamale and Cape Coast.

In Asawase constituency, motorcycle or tricycle is estimated to be about 40% of critical means of transport for the persons living within the constituency.

Statistics at the Driver Vehicle and Licensing Authority (DVLA) has revealed that in the last 10 years, averagely 10,000 motorcycle or tricycle have been registered annually in Tamale alone. The travelling public in the major towns and cities now prefer to patronise the okada instead of taxis. This stems from the fact that the public wants to get through the thick traffic of the cities to get to their destinations in good time.

What used to be just a means of transport for rural folks in particular is now a viable source of livelihood for many a Ghanaian youth. The “Okada business” has put food on the table of many of our young men and their families who had little or no formal education.

In my constituency, I have listened to touching stories of how the ‘okada’ business has been life wire for some of our youth.  In a typical day, some of the okada riders make as much as GHÈ¼150 from their business and after a paying commission of about GHÈ¼50, they are left with some substantial amount of money to take care of themselves and their immediate family.

The okada or Adedeta business is also having multiplying effect on the Ghanaian economy, in that, some of the riders save portions of their income from the business to start other businesses while employing some of their family members to run them.

In Rwanda, a start-up company known as SafeMotos has been established using Uber-influenced smartphone app that connects customers with motorcycle or tricycle taxis. Customers are linked to a safer motorcycle or tricycle taxi driver for a premium fee, of which SafeMotos collects a 13% commission. It focuses on safety and uses data to measure a driver’s accident risk. SafeMotos is providing employment to the youth of Rwanda and revenue for the government as well.

In Nigeria’s most populous city, Lagos, there are over 200,000 okada operators, providing direct employment to over 500,000 people. Given its widespread usage in the sub-region, motorcycles and tricycles presents an opportunity for us to establish of a factory as part of our quest to industrialise.

By assembling the motorcycles here in Ghana and exporting them to countries like Burkina Faso, Togo, Benin and La Cote d’Ivoire where these bikes are predominantly used as public transport can generate revenue and create jobs to address the unemployment challenges of this country.

Even though these okada operators are working hard to make a living, their activities have been described by some people as counterproductive because many of them flout road traffic regulations. They fail to wear protective clothing such as helmets, thereby putting their lives and those of their clients in danger. Some of them ride recklessly resulting in road accidents.

These negative tendencies necessitated a call for an outright ban of the practice and also some of the major reasons that initially influenced the passage of the law. But it is my considered view that the benefits outweighs the social costs and as such we cannot kill the goose that laid the golden eggs by this country’s continuous ban on the use of motorcycle or tricycle for commercial purposes.

The suggestion that motorbikes are used to commit crimes such as snatching of mobile phones and money from people and speed off thereafter is not inherent in the mode but is a consequence of inadequate law enforcement. Where criminals have adopted motorcycle as a tool of criminal activity, police will need to develop methods of countering this trend.

What is critical is that the country must put in place regulations that support the commercial operations of the okada riders. Such regulations must aim at instituting appropriate standards and capacities of a motorcycles and its drivers for public transportation service.

Such regulations must also touch on proper type of motorcycle that can be granted a franchise, the minimum Cubic Centimeter (CC) capacity of motor, travel speed of motorcycle taxis, franchise route, seat and helmet requirements, and training requirements for motorcycle riders looking to register as a Public Utility Vehicle driver.

Through other regulations to support their use for commercial purposes such as setting working time limits within which commercial operations are allowed can help us achieve the objective of creating employment opportunities for youth and also address the transportation needs of our people, especially in the rural areas.

Let us review the law to accommodate okada operators by mainstreaming them into our national transport system so that they can be identified, registered, licensed and policed to work within the road traffic regulations.

I thank you Mr. Speaker and colleagues for your attention.