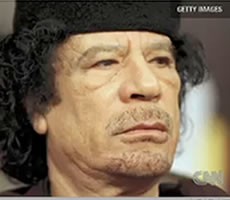 Libyan leader Col Muammar Gaddafi is ready to begin talks to transfer power, according to his spokesman.

He told a news agency discussions would be led by Col Gaddafi’s son, Saadi.

Rebel fighters who now control most of the country, including the capital Tripoli, believe Col Gaddafi is still in hiding in the area.

The BBC’s Jon Leyne says the latest offer will be seen as just another sign of the delusional state of Col Gaddafi and his followers.

The Libyan opposition says supplies of fuel and water should begin arriving in Tripoli – amid fears that Tripoli’s water supply may have been poisoned by Col Gaddafi’s forces.

Meanwhile more evidence is emerging of mass killings in the country.

More than 50 charred bodies have been found in a burnt out warehouse next to a military base south of the capital.