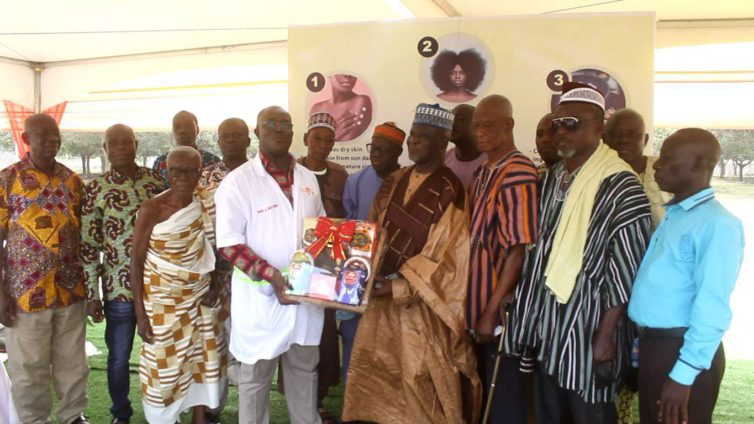 According to the listed firm, illegal mining activities may not be limited to waterbodies alone, but could affect cocoa production which forms part of the very foundation of the country’s economy.

Managing Director of CPC, Nana Agyenim Boateng I therefore considers the practice of custodians and allodial owners selling cocoa farms or releasing land designated for cultivation of the cash crop to illegal miners as unacceptable.

Speaking in an interview with Joy Business in Tema when representatives of Cocoa, Coffee and Sheanut Farmers Association paid a visit to him, Nana Agyenim Boateng I said “there is the need for the farmers to avoid illegal mining and other activities which destroy soil for short-term gain”.

According to him, Ghana and Cote d’Ivoire produce over 60% of cocoa, yet only make a paltry of $10 billion.

“This is because cocoa as explained to the delegation has a long-term value particularly due to the value addition drive we have embarked on,” he explained.

It is estimated that cocoa in it raw form is worth $10 billion, but could earn the nation $28 billion if processed into semi-finished stage of cocoa liquor, cocoa butter and cocoa cake.

The figure will further shoot up to $ 177 billion at the tertiary stage which is made up of chocolate, skincare and cosmetics and hot chocolate.

The MD further said the current drive of the company is in sync with President Akufo-Addo’s goal of value addition and Ghana beyond aid mantra which the country’s natural resource would provide.

He added that although the company was not spared from the harsh reality of Covid-19 on industries globally, the pandemic has created avenues for CPC to explore.

One of such is by removing shell from cocoa beans to obtain nib. The product with its unique market is 40 times higher in antioxidants than in blueberry and high in calcium too.

When processed into paste with over 70% cocoa, its 20 grams is equivalent to 80 grams of aspirin.

Cocoa Processing Company is expected to make additional gains after processing the cocoa beans into butter used for cooking, cosmetics, and pharmaceutical chocolate, among other benefits.

Nana Agyenim Boateng I encouraged more consumption of food that contains polyphenols including cocoa and chocolates to help maintain a healthy body in the era of viral infections.

With the cosmetic bit, CPC is working closely with Food and Drugs Authority to get the license to sell cocoa butter with coconut oil and mango oil for the skin.

On his part, the Bono East Regional Chief farmer, Nana Kwasi Adjei Paul was however not happy with the destruction of cocoa farms without recourse to existing law on the cash crop.

He is therefore asking for enforcement of the law to serve as a deterrent as well as help reserve land for the youth interested in agric.

“We worked with him during his days at Produce Buying Company (PBC) and it is prudent to keep the relationship going,”

“We were extremely impressed after touring the facility, tasting the products and given a gist of the future plan in place. We can only encourage our colleague farmers to even expand their farms due to the immense benefits of cocoa,” he assured.

In helping boost their output, the farmers pleaded with government to make available adequate fertilizers in 2022.

They also promised to work closely with chiefs and families against releasing farmlands to illegal miners.

DISCLAIMER: The Views, Comments, Opinions, Contributions and Statements made by Readers and Contributors on this platform do not necessarily represent the views or policy of Multimedia Group Limited.
Tags:
Cocoa processing company
Coffee and Sheanut Farmers Association
Nana Agyenim Boateng I