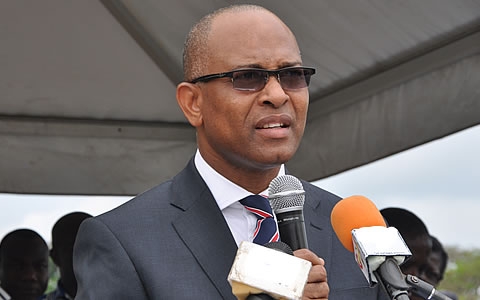 After becoming the country’s largest issuer of cards, GCB Bank Limited (GCB) is working to become the largest acquirer of cards.

The Bank currently records over one million ATM transactions a month compared to 100,000 transactions three years ago.

The Managing Director of the Bank, Mr Simon Dornoo, who disclosed this at a breakfast meeting with GCB Corporate and SME customers in Accra said the Bank is now one of the best value creating companies in Africa.

Present at the meeting were the Bank’s Board Chairman, Mr Daniel Owiredu, other board members, top Management staff and relationship officers. This is the first such meeting with this group since the launch of the new GCB brand in September this year.

The customers, mainly Chief Executive Officers and Finance Directors from oil and gas, hospitality, education, energy, water, health, academia, agricultural and the sports sectors interacted with the Board and Management of the Bank with the view to deepening the existing business relationship for their mutual benefit.

The Bank has also made significant investments in upgrading its technology infrastructure to provide the needed platform for better interaction with customers.

He said services through multiple channels such as mobile phones, the internet, ATMs, Point of Sale terminals to complement the Bank’s extensive network are being offered.

Mr Dornoo announced that an aggressive plan to refurbish GCB branches to give them a modern and welcoming look and feel takes off next year.

New branches will be opened in areas where the Bank is under-represented to get closer to customers. The Bank has a network of 157 branches, 250 ATMs and 20 agencies across the country.

The Board Chairman commended the partners including customers of the Bank saying the relationship will enhance business for the mutual benefit of their companies and the Bank adding that GCB has the financial muscle to support the critical sectors of the economy.

Mr. Owiredu said the objective of the Bank is not to just mobilize deposits but to channel these to the right sectors where the nation and the majority of Ghanaians will be the beneficiaries of the outcomes.

“I want this day to go down in the annals of the Bank as the day the business of corporate and relationship banking was reborn,” he said.

The Head of Corporate Banking Department of GCB, Mr George Fuachie, announced that corporate services teams are being introduced to complement the work of relationship managers for the convenience and benefit of customers.

The Corporate /SME customers’ breakfast meeting comes after another successful meeting with a cross section of retail customers recently.