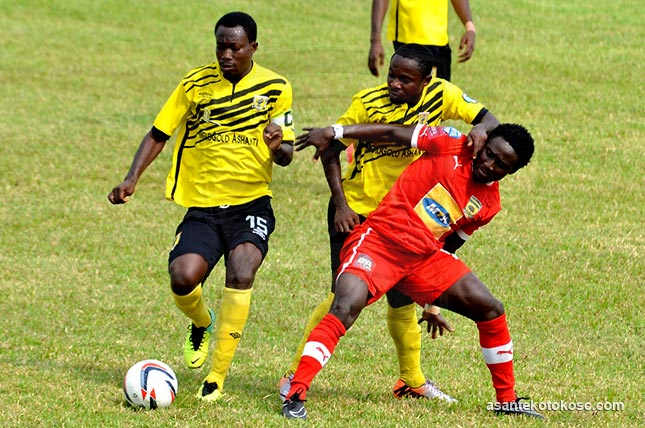 Asante Kotoko sailed through to the final of the GHALCA organized First Trust G6 tournament after sharing honours with the league champions Ashgold at the Essipong Sports Stadium, Sekondi.

The Porcupine Warriors dominated their regional rivals Ashgold in the first 45 minutes and scored the only goal of the half through Kwame Boateng in the 20 minute, after capitalizing on a blunder by Desmond Agbekpornu.

The Miners back from recess piled pressure on the Porcupine warriors, but wasted the numerous free kicks that came their way and Eric Ofori Antwi also provided them the shield in post to deny the champions from scoring.

Kotoko also came into the game and could have punished Ashgold on the break, but Fatau Dauda also demonstrated good goalkeeping to save his side.

The woes of Ashgold was compounded when Augustine Sefah was sent off for foul play and just as everybody thought the game was ending in a 1-0 in favour  of Kotoko that Isaac Amoah outmuscled Edwin Frimpong Manso to snatch the  equalizer for the league champions with 2 minutes into injury time.

The Dormaa based club went into the game targeting the three points while the Mauve and Yellows needed only a point to get them to the final of the competition.

Although Medeama dominated play in the first half, the Dormaa boys fetched the opener in the 20th minute mark through former Asante Kotoko player Yaya Mohammed.

The Tarkwa based club had the opportunity to pull even but Francis Addo squandered the penalty to give Aduana Stars a big sigh of relief.

From the recess, Medeama SC opened fire on their opponent as they dominated play but they fluffed the chances they created with Aduana’s shot stopper Joseph Addo being the outstanding player on the field.

As Medeama thought they were close to getting the equalizer, they got stunned when substitute Nana Yaw Afriyie in the 78th minute mark doubled the “Ogya lads” lead and late in the game Yaya Mohamed made it three, which was his brace on the day.

Aduana Stars are now in the final and they will be waiting for the winner in the Asante Kotoko and Ashanti Gold game.