Ghana set to produce its own vaccine - Presidential Advisor on Health - MyJoyOnline.com

Ghana set to produce its own vaccine – Presidential Advisor on Health 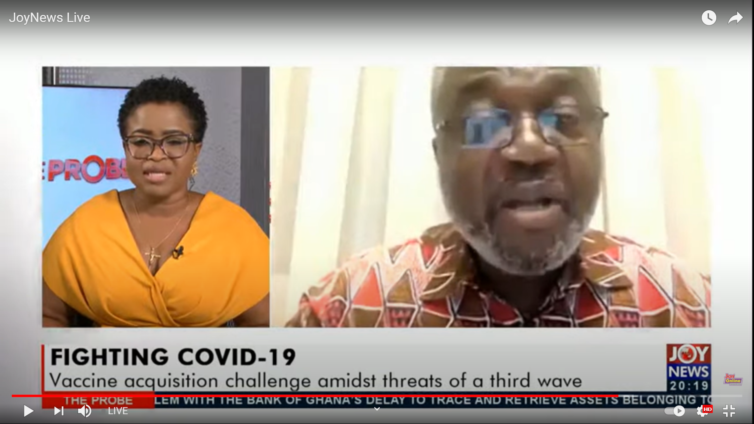 The Presidential Advisor on Health has hinted that Ghana is set to produce its own Covid-19 vaccines.

Speaking to Emefa Apawu on JoyNews’ The Probe, Sunday, Dr Anthony Nsiah Asare disclosed that a committee has been formed for this agenda.

“The committee is working hard, we meet several times in the week so very soon we will have our own vaccine production,” he added.

According to him, all necessary efforts to this effect are in progress; therefore, the government will achieve its purpose in due time.

“The committee set up by the president for vaccine acquisition is working very hard. I happen to be a member of the committee. We have made the scientists and a lot of people who have shown interest in it. So we will see the light very soon.

He was contributing to discussions on the Probe regarding the vaccine acquisition challenge amid fears of a third wave.

The report further revealed that the Norwegian Police is searching for one of the intermediaries who negotiated the deal on financial crime charges.

Minority in Parliament called for a bipartisan Parliamentary probe into the claims made by the Norwegian Newspaper.

Meanwhile, the Ranking Member on Parliament’s Health Committee, Kwabena Mintah Akandoh, has stated that he finds the whole scenario mind-boggling.

“Now, let’s come to the quest for vaccines and why we are not getting and its pricing. At the committee level, the minister appeared before the committee for the budget estimate, and they told the committee that no vaccines are going to be bought more than 10 per cent per dose.

“And so when we approved the life sum for the ministry, it is up to them to go so if there is any agreement whether international or whatever, they will then come back to the committee or parliament for the approval of that agreement.

“And so when we heard that they have entered into negotiations or agreement with people from Dubai to buy one dose of Sputnik V at $19, I was very shocked,” he added.