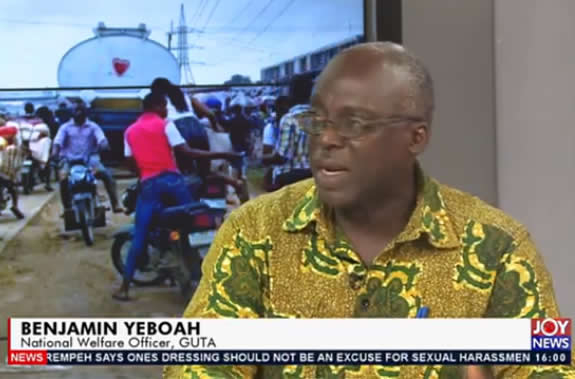 The Ghana Union Traders Association (GUTA) says its members are unhappy with a decision by Nigerian authorities to close its land borders.

National Welfare Officer of GUTA, Benjamin Yeboah, said some of the Association’s members are feeling the effects of the closure on their businesses.

In an interview on JoyNews’ The Pulse, he narrated how a trader who had gone to Nigeria to purchase goods was prevented from leaving the country with the products due to the closure of the borders.

“He had to go back but unfortunately for him, when he went back to the supplier, he [supplier] said because he did not envisage that problem, he could not take back the goods neither could he return the money.

“The trader had to come back to Ghana without the goods and his money,” Mr Yaboah said.

Nigeria officially announced the closure of all its land borders on Tuesday. The decision, according to the country’s Comptroller-General of the Nigerian Customs Service, Hameed Ali, is part of an effort to curb smuggling.

“All goods, for now, are banned from being exported or imported through our land borders and that is to ensure we have total control over what comes in,” Hameed Ali, comptroller-general of the Nigerian Customs Service, told reporters in Abuja on Monday.

Africa’s largest economy launched a partial border closure in August as part of an effort to thwart the smuggling of rice and other goods, and there had been widespread local media reports of a broader closure.

But Ali’s announcement was the first official confirmation of a total shutdown in trade across Nigeria’s land borders — including goods that had been moving legally.

“We are strategising on how best the goods can be handled when we eventually get to the point where this operation will relax for the influx of goods,” he said. He did not give a timeline for any relaxation of the controls.

The decision has left both Ghanaian and Nigerian traders who travel to that country to purchase goods for sale stranded.

For the Ghanaian traders, the decision is in retaliation of their call for the Ghana government to enforce laws barring foreigners from retail trade. A fight they have been championing for the most part of this year.

Mr Yaboah wondered why the decision to close the borders was not communicated to GUTA.

“There was no official interaction with anyone. Nigeria just got up one day and decided that ‘we are having problems with security, flooding of our markets, smuggling’ and it is affecting their industries so they decided to take a decision regardless of the ECOWAS treaty we have all signed on to,” he lamented.