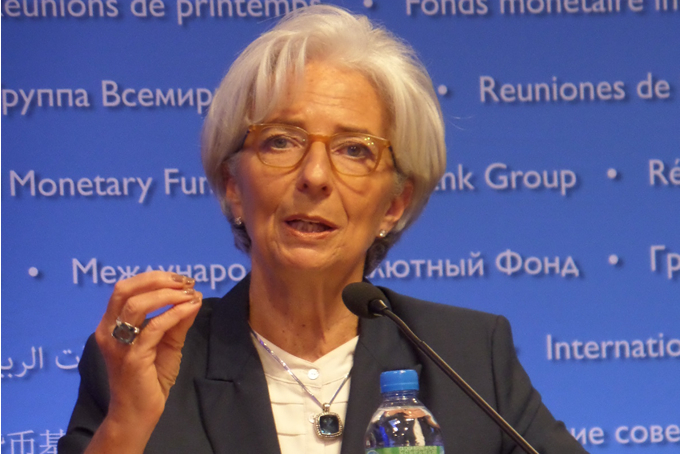 Trump backed out of a joint communique agreed by Group of Seven leaders in Canada at the weekend that mentioned the need for “free, fair and mutually beneficial trade” and the importance of fighting protectionism.

The U.S. president, who has imposed import tariffs on metals, is furious about the United States’ large trade deficit with key allies. “Fair trade is now to be called fool trade if it is not reciprocal,” he tweeted on Monday.

In response, Lagarde unleashed a thinly veiled attack on Trump’s trade policy, saying challenges to the way trade is conducted were damaging business confidence, which had soured even since the weekend G7 summit.

The Washington-based IMF is sticking to its forecast for global growth of 3.9 percent both this year and next, she said, before adding: “But the clouds on the horizon that we have signaled about six months ago are getting darker by the day, and I was going to say by the weekend.”

“The biggest and darkest cloud that we see is the deterioration in confidence that is prompted by (an) attempt to challenge the way in which trade has been conducted, in which relationships have been handled and in which multilateral organizations have been operating,” Lagarde said.

The IMF managing director spoke after a meeting in Berlin with German Chancellor Angela Merkel and the chiefs of the World Trade Organisation (WTO), the World Bank, the Organisation for Economic Cooperation and Development (OECD), the International Labour Organization and the African Development Bank.

Merkel said on Sunday the EU would implement counter-measures against U.S. tariffs and described Trump’s rejection of the G7 communique as “sobering and a bit depressing”.

Investors are fearful of a tit-for-tat trade war, though markets were relatively calm on Monday after an early wobble.

WTO Director-General Roberto Azevedo told the Berlin news conference: “We must … stop this escalation of tensions. A tit-for-tat process is not going to be helpful.”

He also criticized the United States’ conduct at the WTO.

“The U.S. has been focusing much more on bilateral — unilateral even sometimes — measures, which is not something that is support of the rules-based trading system.

“They have been complaining about the system, they say that they want to improve the system, but we would expect a more constructive approach on their part,” Azevedo said.

Earlier, Germany’s economy minister said Berlin saw no immediate solution to the trade row between the United States and other major economies but remained open to talks “among friends”, seeking to head off a full-blown global trade war.

“At the moment, however, it seems that no solution is in sight, at least not in the short term.”

Particularly concerning for Germany, a major car exporter to the United States, is Trump’s weekend tweet that Washington is looking at tariffs on automobiles.

The European Commission, which coordinates trade policy for the 28-member EU, aims to target 2.8 billion euros worth of U.S. imports, including bourbon and jeans, with additional 25 percent duties from early July.

It already has broad backing from EU member states, but needs to consult with them in the next couple of weeks.

European Commission President Jean-Claude Juncker, while questioning whether the United States was truly an ally, said the bloc did not want to stop talking with Washington.

“We do not want to cut off discussions and further talks will of course need to address the automobile sector,” he said.