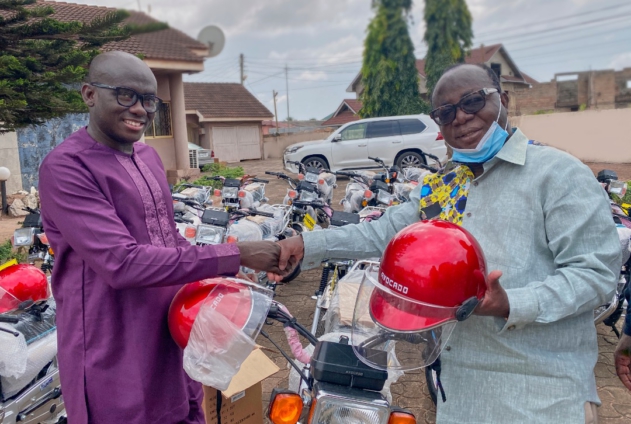 Deputy Attorney General, Godfred Yeboah Dame has presented 37 motorcycles and 21 sewing machines to eight constituencies around the country to help in the campaign efforts of the New Patriotic Party (NPP) and President Nana Akufo-Addo in the upcoming December 7, 2020 elections.

The beneficiary constituencies include Ayawaso West Wuogon and Bortianor-Ngleshie-Amanfro in the Greater Accra region, Wenchi in the Bono Region, Akyem Swedru and Ofoase-Ayirebi in the Eastern Region, Tempane in the Upper East Region as well as Evalue-Gwira and Elembelle constituencies in the Western Region.

The Deputy Attorney General told journalists at the presentation of the motor bikes to NPP National Chairman, Freddie W. A. Blay that he was only contributing his widow’s mite to help oil the wheels of the Presidential and Parliamentary campaigns.

“This is my little contribution to help propagate the good works of President Akufo-Addo for the country. Even as a member of the government, I am amazed at the performance of Nana Addo across all sectors.

“From education, through railways, agriculture, manufacturing, the handling of the economy in the wake of the global COVID 19 pandemic, the President’s leadership and execution have been par excellence,” said Godfred Dame.

“People need to hear this across the country. I see the motorbikes as the vehicle that will literally carry the NPP’s message to every nook and cranny of the country to spread the good word about Nana Addo.

“The sewing machines are a donation from my wife, Dr Joycelyn Dame, and they are intended to assist the hardworking women around the country who are appreciative of the President’s efforts in poverty alleviation among women in Ghana.

“I have been making similar humble contributions to the party over the  years and I am extremely proud that Ghanaians have seen the powerful force of progress that the NPP represents and give the President 4 More to do More ” the Deputy Attorney General said.

The Chairman of the NPP, Freddie Blay showered praise on the ‘brilliant but humble’ Dame for the donation of the vehicles and urged other party faithful to follow in his footsteps.

“Godfred Yeboah Dame is a true party man. He has been doing a lot for the party behind closed door. I am a witness to his benevolence towards the party since I became part of the leadership. He believes so much in the NPP and what we represent.

“You see, the government has done an incredible job. We must be able to show what we have done to every household. Whatever you give us, we use it to move around the country, distributing and campaigning on behalf of the President and the parliamentary candidates,” Freddie Blay said.

The NPP Chairman further asserted the party’s resoluteness to win the elections to continue to transform the country as legacy for generations yet unborn.

“President Nana Addo has defined his presidency. He wants to change our society forever. With Free SHS, Ghanaian children are getting educated to transform their lives. With only a Ghana card, they can go to the University and become lawyers like Godfred Dame.

“Their lives and potential would truly be realized. Through One District One Factory, we are pushing manufacturing and adding value to our produce and in the process creating value chains and jobs.

“These are some of the projects which have never been seen before in this country coupled with the expansion in Railways and our economic growth. When Ghanaians give us four more years, this country will be totally transformed from what we inherited,” concluded Freddie Blay.

Most international polls and economic think tanks have tipped President Nana Addo Dankwa Akufo Addo to win the general elections on the back of incredible first term performance in government.