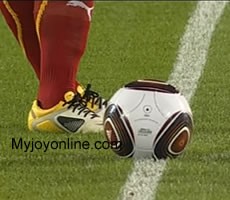 Hearts of Oak will cross swords with an impressive Medeama SC side who are unbeaten in their last seven games, wining four and drawing three, at the Cape Coast Robert Mensah Stadium on Wednesday.

The Phobians have been ordered by the Premier League Board (PLB) to play their home games at the Robert Mensah Stadium following the "misbehavior" of Hearts of Oak fans during their league match with King Faisal.

Despite the change of venue, the Phobians will hope to improve their home performance this time after drawing 1-1 with King Faisal in their last home game.

Hearts of Oak have won seven, drawn 2 and lost 2 in 10 games of the new season and are one point behind the league leaders.

Fourth placed Medeama are unbeaten on the road so far this season, earning 4 draws and one victory.

Coach Evans Adotey's team have lost one game so far and are five points adrift second placed Hearts of Oak.