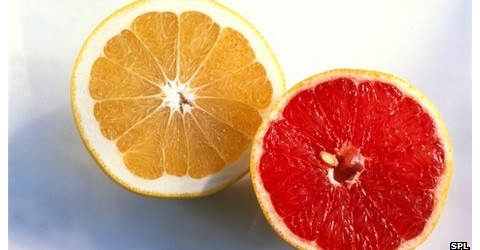 Doctors have warned of a “lack of knowledge” about the dangers of mixing some medications with grapefruit.

The fruit can cause overdoses of some drugs by stopping the medicines being broken down in the intestines and the liver.

The researchers who first identified the link said the number of drugs that became dangerous with grapefruit was increasing rapidly.

They were writing in the Canadian Medical Association Journal.

The team at the Lawson Health Research Institute in Canada said the number of drugs which had serious side effects with grapefruit had gone from 17 in 2008 to 43 in 2012.

They include some drugs for a range of conditions including blood pressure, cancer and cholesterol-lowering statins and those taken to suppress the immune system after an organ transplant.

Chemicals in grapefruit, furanocoumarins, wipe out an enzyme which breaks the drugs down. It means much more of the drug escapes the digestive system than the body can handle.

Three times the levels of one blood pressure drug, felodipine, was reported after patients had a glass of grapefruit juice compared with a glass of water.

The side effects are varied depending on the drug, but include stomach bleeds, altered heart beat, kidney damage and sudden death.

Dr David Bailey, one of the researchers, told the BBC: “One tablet with a glass of grapefruit juice can be like taking five or 10 tablets with a glass of water and people say I don’t believe it, but I can show you that scientifically it is sound.

“So you can unintentionally go from a therapeutic level to a toxic level just by consuming grapefruit juice.”

The report said: “We contend that there remains a lack of knowledge about this interaction in the general health care community.”

They added: “Unless health care professionals are aware of the possibility that the adverse event they are seeing might have an origin in the recent addition of grapefruit to the patient’s diet, it is very unlikely that they will investigate it.”

Other citrus fruits such as Seville oranges, often used in marmalade, and limes have the same effect.

Neal Patel, from the Royal Pharmaceutical Society said: “Grapefruit isn’t the only food that can cause issues, for example milk can stop the absorption of some antibiotics if taken at the same time.

“Although some of these interactions may not be clinically significant, some may lead to more serious outcomes.

“Pharmacists are the best port of call for anyone concerned about how their diet may affect their medication. Information about any interactions would always be included in the patient information leaflet that comes with the medicine.”

A spokesman from the Medicines and Healthcare products Regulatory Agency said: “We encourage patients and healthcare professionals to report any suspected adverse drug reactions to our Yellow Card Scheme.

“You can get more information about the scheme and report online.”