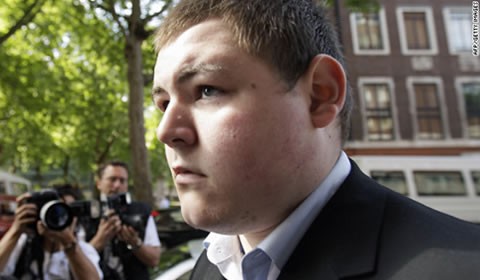 An actor in the Harry Potter movies was jailed for two years Tuesday for his role in riots that swept London last summer.

He also pleaded guilty to handling stolen goods during rioting last August, according to court documents posted online.
However, the court cleared him of a charge of possessing an article with intent to destroy or damage property in relation to a petrol bomb he was carrying.

“Anyone watching the footage in this case can only imagine the mayhem that took place on the streets,” Judge Simon Carr said, according to court documents.

Waylett had chosen to go out on the streets on what was the third day of the violence, the judge said, and video footage showed him near a supermarket that was being looted.

“You were pictured on a number of occasions with a bottle full of petrol with a rag as a wick,” the judge said.

“I accept entirely the jury’s verdict that you did not throw or have any intention of throwing it but merely being in possession of it would have been terrifying to anyone who saw you.”

Waylett was given a two-year sentence for violent disorder and 12 months for handling stolen goods, to run concurrently, according to the court documents.

Rioting first broke out in Tottenham, north London, in the wake of a peaceful protest over the fatal shooting of a local man by police. It spread to other parts of London and other English cities over the following days.

The disorder was followed by a huge police crackdown on suspected rioters.

According to London’s Metropolitan Police, across the city there were more than 3,800 arrests for a variety of offenses, including burglary, arson and violent disorder. As of last week, more than 1,300 people had been sentenced, with nearly half of them sent to prison.